What Do Millennials Want From Washington? A Panel Examines 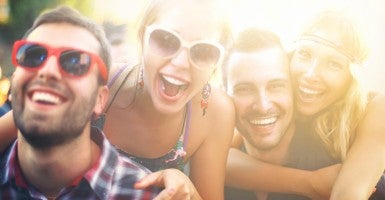 Washington, D.C.—“There’s a moment coming where we realize it’s on us, that there’s no one coming to save us, that this is not, ‘the adults are coming to fix things,’” said Rock the Vote President Ashley Spillane, alluding to a not-so-distant 2016 election. “I think that that’s coming … and hopefully we will see a shift in candidates who understand that.”

Spillane was speaking at a panel Tuesday morning at the U.S. Chamber of Commerce hosted by Rock the Vote, LinkedIn, and the McGraw Hill Financial Global Institute.

Panelists discussed a host of issues plaguing millennials, who now make up the largest generation in our country’s history and the largest segment of the U.S. workforce—and how politicians ought to better target this segment of the population.

Student debt loan, rising housing cost, and the development of a truly global economy were all cited as factors contributing to what Standard & Poor’s Beth Ann Bovino called a “failure to launch into full economic participation.” This failure, coupled with the fact that millennials are as conservative when it comes to spending as members of the “Silent Generation” (those living directly after the Great Depression), could cost the U.S. economy up to $244 billion over five years, according to McGraw Hill Financial.

“From a policy perspective, I do not think there is very much legislation, if anything major, I can speak to being tailored or addressed for millennials,” said Rep. Patrick Murphy, D-Fla., the second youngest member of Congress.

“With debt in our country … are there serious attempts being made to reduce it?” Murphy added. “No, but there’s a lot of talk about it. And that debt burden is going to be on this generation.”

Spillane and LinkedIn co-founder Allen Blue also spotlighted a need for politicians to meet millennials where they live: online. Spillane specifically acknowledged the importance of “authenticity” when asked by Wall Street Journal’s Nick Timiraos how carrying the “Internet around in their pants” via smartphones has changed the way young Americans interact with their world.