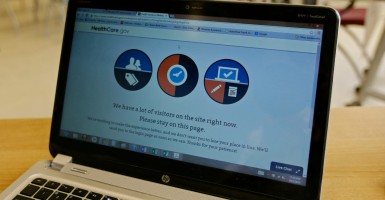 Following close to two years of reports of cost overruns on HealthCare.gov, increased premium prices and lost work hours since the implementation of the Affordable Care Act, Rep. Peter Roskam, R-Ill., is introducing legislation to appoint a watchdog to oversee the health care law and ensure the protection of taxpayer dollars.

The legislation calls for the creation of a special inspector general for monitoring the Affordable Care Act, or SIGMA.

“The false, rosy claims of Obamacare have largely been debunked, and there’s a level of dissatisfaction all around,” Roskam said in an interview with The Daily Signal. “More time and more attention is in the oversight function. [The legislation] doesn’t reinvent the wheel in that it doesn’t use the same legislative architecture, but what will do is force disclosure, and the public then has choices about how it wants to move forward.”

A number of conservative organizations including Americans for Tax Reform, Americans for Prosperity and the Galen Institute also came out in support of the legislation’s goals.

The special inspector general tasked with overseeing Obamacare would serve until the law is fully repealed, which Republicans are working to do during the budget process.

Though the creation of a special inspector general would take additional appropriations, Roskam is confident the price tag would be trumped by the savings additional oversight would bring.

“Nobody is looking at it holistically,” Roskam said of the current oversight the agencies tasked with overseeing the law are conducting. “Some of these things cross jurisdictional lines. It has to be a holistic approach.”

Obamacare went into effect in October 2013. Since then, troubles with the law have been well documented by the media and further explored by congressional panels. In addition to the disastrous launch of HealthCare.gov, which cost taxpayers more than $2 billion, more than 4 million Americans received cancellation notices from their insurance providers and employers began to cut hours for workers to under 30 hours per week.

Democrats counter that Obamacare has expanded coverage to millions of Americans and given those with pre-existing conditions access to affordable coverage.

“If a special inspector general is good enough for programs of that scope and that magnitude, then surely it’s good enough for a program that is going to cost more than $1 trillion,” said @PeterRoskam.

According to the nonpartisan Congressional Budget Office, the law is expected to cost more than $1.2 trillion.

Policymakers in Washington, D.C., have frequently expressed concerns that taxpayer dollars are being abused because of a lack of oversight regarding the law. Many Republicans agree a special inspector general would help to ensure those dollars are being spent wisely.

“As long as this law is on the books, we need a watchdog, namely a special inspector general, to investigate its implementation and ensure our taxpayer dollars are being spent within the letter of the law,” Sen. Pat Roberts, R-Kansas, said in a statement.

“The deeper we dig into Obamacare, the more problems we find. Establishing a special inspector general will increase transparency and hold the federal government accountable for its bureaucracy’s many failures,” he continued. “While the House works to repeal the president’s disastrous health care law, America’s families and taxpayers have a right to know the true cost of Obamacare’s waste and abuse.”