Favoritism for a Few Politically Connected Cronies: The Problem With Ex-Im Bank 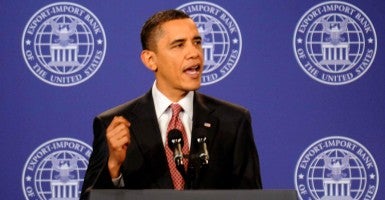 Those lucky enough to have foreign deals backed by the Export-Import Bank fall almost entirely in the first group. They don’t need the help, but they’ll take all the favors they can get.

Only 2 percent of American exports get this kind of subsidy from the government, and over time, those special taxpayer-funded favors can mean hundreds of millions in additional profit to those lucky few corporations.

As for the others, they’re left to compete at a disadvantage. That’s not opportunity for all; it’s favoritism for a few politically connected cronies.

It’s nice to be among the favored few, but it doesn’t just happen, and it doesn’t come cheap. Boeing, Caterpillar and General Electric reaped a combined $10 billion in Ex-Im subsidized financing in fiscal 2013, but they had to spend millions of dollars lobbying to keep the bank open.

And they were not alone. The Sunlight Foundation found 19 of the top 20 organizations lobbying Congress to extend the charter of the Export-Import Bank are direct beneficiaries of its financing and loan guarantees. The cost of such lobbying is far beyond the resources of most small businesses, meaning they don’t stand a chance competing for similar subsidies.

Only about 20 percent of Ex-Im’s financing benefits small businesses. Low as that number is, it vastly overstates Ex-Im assistance to “the little guy.” The Bank artificially inflates this number by defining a small business as any business having fewer than 1,500 employees. That’s not a Mom-and-Pop operation.

Indeed, according to the U.S. Census Bureau, barely one-tenth of 1 percent of all employer firms have more than 1,500 employees. Yet that’s the elite group that garners the vast majority of Ex-Im’s largesse.

But it’s not just a handful of big domestic companies getting a leg up from Ex-Im. A new study by the Mercatus Center revealed overseas buyers—the foreign businesses on the purchasing end of exports subsidized through Ex-Im—are primarily very large firms.

Additionally, authors Veronique de Rugy and Diane Katz found that “among the top 10 buyers, five are state-controlled and rake in millions of dollars from their own governments in addition to Ex-Im Bank subsidies. These multiple-subsidy streams offset operating costs, and provide a significant competitive advantage over unsubsidized U.S. firms engaged in similar ventures.”

Some of these state-controlled firms actively work against U.S. interests abroad. Former presidential national security advisor Mark Pfeifle wrote in The Wall Street Journal that state-owned Russian Bank Vnesheconombank got a $497 million loan guarantee from Ex-Im in 2012 and another $703 million guarantee in 2014.

The bank is closely partnered with Russian arms exporter Rosoboronexport, which supplies the Assad regime in Syria and the Iranian mullahs with missile systems.

Even Russian oligarchs are eligible for these benefits—provided, of course, they hire the right lobbyists. Vladimir Putin’s oligarch buddy Gennady Timchenko paid Patton Boggs $110,000 to lobby Ex-Im directly as well as some senators on the side.

If it weren’t for the sanctions the U.S. placed on Timchenko and a DOJ investigation into money laundering, he might have still received his loan guarantee for 11 luxury Gulfstream jets.

If this sounds shady, it’s only scratching the surface. Ex-Im risk management and record keeping has been legendarily lax for years, opening the door to fraud and corruption.

The Office of Inspector General recorded 124 investigations into Ex-Im activities between October 2007 and March 2014, and multiple instances of millions of taxpayer dollars vanishing due to fraud. Just last year, four Ex-Im officials were suspended or removed for various ethical breaches.

There are mounting reasons to shut down the Ex-Im Bank, and fewer to keep it open. This government bank helps only a small fraction of U.S. businesses; it gives big corporate beneficiaries an unfair advantage; it’s rife with fraud and unethical behavior; and it assists unfriendly foreign governments and businesses they control.

Congress has to decide whether to reauthorize the Ex-Im in June. Americans want a healthy economy and an efficient, accountable government, not one that doles out favors to a select few wealthy people, corporations or foreign governments and corporations working against U.S. interests overseas.

We should expect our government to create opportunities for everyone, and give favoritism to none.