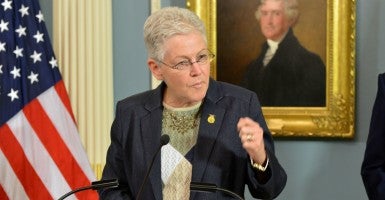 The feds have launched a new power grab, and it’s coming at the expense of property rights.

The Environmental Protection Agency and the Army Corps of Engineers have proposed a new rule to define “waters of the United States.” This definition is supposed to clarify what “waters” are covered under the Clean Water Act and therefore what these two agencies can regulate.

Most people would consider a water body to be a river, a lake, maybe even a pond. But the feds are casting their nets much wider than that. Their proposal could cover almost any type of water. Almost all ditches, including man-made ditches, could be regulated. Depressions in land that only sometimes have water in them could be deemed a tributary and covered under the rule, even if the depression is bone-dry almost every day of the year. The sheer overreach of the proposed rule is breathtaking.

Under the Clean Water Act, property owners are often required to obtain costly and time-consuming permits if engaging in activities that affect jurisdictional waters. We’re not talking toxic waste disposal being required to trigger the need for a permit. The statute would even prohibit actions that cause absolutely no environmental harm. For example, someone might need a permit for kicking some sand into a jurisdictional water.

The EPA is promoting the rule by cynically asking, “Do you choose clean water?”  The real question posed by the proposed regulation is: Do you choose federal regulation of almost all water?

Common activities, from farming to home building, could require a permit. Individuals who want to use their property for ordinary, everyday uses could be forced to get a permit. Sackett v. EPA offers one egregious example of overzealous regulatory enforcement. In this 2012 Supreme Court case, the EPA sought the power to impose fines of $75,000 per day on a couple for placing gravel on virtually dry land to build a home in a built-out subdivision. This proposed rule will likely lead to even more Sackett-type abuses of regulatory power.

Put simply, this rule is an attack on property rights. As EPA and the Corps of Engineers claim jurisdiction over more and more waters, property owners will have to secure more and more permits—or simply forgo projects because of the additional cost and time required to secure a permit.

And there’s a growing risk of “gotcha” enforcement. It’s already tough for property owners to know that their property has a jurisdictional water. Because the proposed rule is so broad and vague, this problem is only going to get far worse. The existence of a jurisdictional water may be far from clear—even to the EPA and the Corps, at least until they subjectively decide that a water is jurisdictional after all. Through this water (and land) power grab, the EPA and Corps will have the power to limit severely how people can use their property.

Furthermore, the proposed rule ignores the important role states play in protecting water resources—a role stressed in the Clean Water Act itself. States have a better sense of their specific environmental needs than the federal government and can provide a tailored approach to regulation. Yet the EPA and Corps proceed as though they know best, no matter what the law says about state power.

The EPA is promoting the rule by cynically asking, “Do you choose clean water?” As if critics of the rule want dirty water. The real question posed by the proposed regulation is: Do you choose federal regulation of almost all water? The Clean Water Act rejects this federal power grab.

At the start of April, the agencies sent a final version of the rule to the Office of Management and Budget for its approval. Congress must act quickly to stop this rule from going forward.

Ultimately, Congress should develop legislation that clearly defines what waters are regulated under the Clean Water Act. But for now, lawmakers should pass legislation directing the agencies to withdraw their proposed rule immediately. Property owners shouldn’t have to walk on egg shells, afraid of overzealous agencies going after them for simply using their land for ordinary activities and making an honest living.