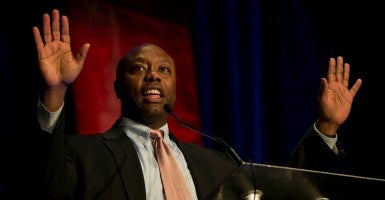 The Obama administration has zeroed-out funding for any new scholarships in the D.C. Opportunity Scholarship Program, meaning the program, which provides scholarships to children from low-income families to attend a private school of choice, will slowly atrophy over time.

On Thursday, the House Committee on Oversight and Government Reform held a hearing on the program.

>>> Congress Goes to High School: Students Get a Firsthand Look at Debate Over School Choice

Thankfully for families benefiting from the educational opportunities it provides, members of Congress such as Sen. Tim Scott, R-S.C., are fighting not only to secure the future of school choice in Washington, D.C., but to expand the highly successful Opportunity Scholarship Program.

The program has resulted in happier parents, students with access to safer schools, improved academic outcomes, and significantly improved graduation rates for participants.

For example, in a 2005 qualitative study of families participating in the D.C. Opportunity Scholarship Program conducted by researchers Thomas Stewart, Patrick Wolf, and Stephen Cornman, respondents said that they felt the schools their children were now able to attend were safer, and had stricter discipline policies.

In the study, which was conducted relatively early on into the scholarship program’s implementation, families participating in the D.C. scholarship program used words like “blessed” and “grateful” to describe having access to a scholarship to attend a school of choice.

Both at school and at home, parents who were awarded a scholarship for their child to attend a school of choice became more active and involved in their child’s education. Parents were motivated to find better educational opportunities for their children, and felt that the D.C. Opportunity Scholarship Program had given them the chance to do just that.

The overwhelming sentiment of parents participating in the study was one of satisfaction with their child’s new school. As one parent put it:

When my son dressed in that uniform with that green blazer, the white shirt, tie, gray trousers and he looked like a gentleman and a scholar and he had his hair cut and his glasses and he was just grinning from ear to ear that he was going to be a part of that [new school culture] and he went to school that day and he was excited about going to school.

High levels of parental satisfaction likely reflect improvements in their children’s educational outcomes. A 2010 evaluation published by the U.S. Department of Education found that the impact of voucher use in the D.C. Opportunity Scholarship Program resulted in a 91 percent graduation rate for participants, compared to a 70 percent graduation rate among the control group.

The 21 percentage point difference for impact means the typical student who was awarded a scholarship and used it to attend a private school had a graduation rate of 91 percent, compared to 70 percent for students who applied for a scholarship but were not awarded one.

Although the empirical evidence suggests impressive impacts of the D.C. scholarship program, the most compelling outcomes are seen in the successes of students who have graduated high school, gone on to college, and are beginning what will be promising educational and career journeys.

Three such students—Jordan, Tiffany and Carlos—are great examples of how receiving an D.C. Opportunity Scholarship can be a significant boost.

Jordan White graduated from Georgetown Day School in 2008, and went on to attend Oberlin University. In 2013 she received her bachelor’s degree in Japanese Studies and is now a translator for a company in Kagoshima, Japan.

Tiffany Dunston graduated from Archbishop Carroll High School in D.C. in 2009 and completed her undergraduate work at Syracuse University in 2013. She is now working on her Ph.D. in Bio Chemistry.

Carlos Battle graduated from Georgetown Day School in 2010. He is currently a senior at Northeastern University in Boston and will graduate this month with a Bachelor of Science degree in Psychology and Social Services.

As is clear from the empirical evidence and stories from students, the D.C. Opportunity Scholarship Program has greatly increased educational opportunity for students in the nation’s capital.

The first decade of choice in D.C. has been a resounding success. Here’s to the next decade.