Money Didn’t Change This Man’s Life. But a Mentor Did. 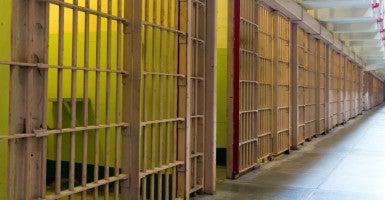 When mere material assistance has failed, relationships can be transformational.

That’s the message of a video series recently released by the Center for Neighborhood Enterprise, which has garnered press attention as well as millions of online viewers. The series documents the work of grassroots leaders in low-income communities throughout the nation who are addressing the most devastating, entrenched forms of poverty and self-destructive behavior.

“The impact of these testimonies goes beyond the current political logjam,” said Center for Neighborhood Enterprise Founder and President Bob Woodson. “Experience trumps argument: What do you think is the answer to poverty? Well, let me show you what I saw.”

Depicted in the series is the story of Omar Jahwar and Antong Lucky.

Jawhar, a community leader, had established a track record of success in quelling youth violence in the streets and schools of Dallas. When gang rivalry and violence peaked within the prison population in the mid-1990s, Dallas corrections authorities hired him as their first gang specialist to work within the walls of a state prison.

Omar embraced the mission. Among the first of his charges was an intimidating figure—Antong Lucky,

Lucky had started the Dallas chapter of the Bloods gang in a neighborhood dominated by its notorious rival, the Crips. In spite of Antong’s threatening demeanor and reputation, Jawhar recognized that he had a latent desire to live a positive, successful life, and that seed could take root if given the proper support and investment.

Lucky had been just nine months old when his father received a 50-year prison sentence, but his grandparents stepped in as care givers and did their best to pass on their values and guiding principles.

In his earlier years, Lucky had followed their lead and became a straight-A student. Sadly, his grandparents’ influence was no match for the culture of the streets under the rule of gangs and drug dealers.

“As much as I wanted to stay focused and concerned about school, I had to be a different person to survive in that environment,” Lucky said.

He recounted the standard process of recruitment in drug trafficking: The younger kids would start off by washing the pushers’ cars and worked their way up to serving as look-outs for police—and eventually they began selling drugs themselves.

But that lucrative lifestyle took its toll. Lucky witnessed many of his friends killed in street violence. “I was seeing friends lost to this idea we created, and I ended up going to prison,” he said.

It was when he was incarcerated that he began to reclaim his life, and Jawhar’s continual, personal outreach enabled him to fully change direction.

While in prison, Lucky started a program called “We Make Real Mentors” and was able to establish peace among rival gangs.

After his release, Lucky continued to work with Omar’s anti-violence initiative, Vision Regeneration. Now he has been by his side for 10 years—using the street credibility of his OG (Original Gangster) status to forge a truce among warring gangs.

Lucky’s most recent venture is in the entertainment industry. He launched the “We Make Real Music” recording studio to counter the devastating message of the hip-hop industry that glamorizes violence.

Jawhar stresses that the transformation Lucky experienced is possible only through consistent, long-term, personal relationship with a mentor.

“You have to show these young people how to navigate that dangerous terrain. You cannot do a drive-by analysis of this kind of problem,” he said.

“I don’t think you can dismiss the importance of the human voice and the human touch,” Jawhar added. “You have to reclaim lives one by one.”