Congress Goes to High School: Students Get a Firsthand Look at Debate Over School Choice 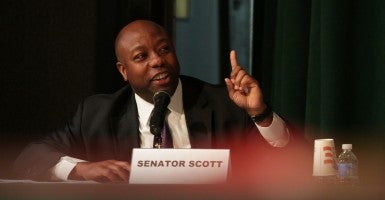 “When parents have better choices, their kids have a better chance,” says @SenatorTimScott

More than 100 students joined teachers and parents in the high school’s auditorium to watch members of Congress spar over the effectiveness of the D.C. Opportunity Scholarship Program, which has provided financial support to about 6,000 low-income students in the District of Columbia.

Jordan Winston, a 17-year-old junior who serves as the school’s student council president, is one of the program’s beneficiaries. He had the honor of sharing the stage at Archbishop Carroll with some of America’s most powerful leaders.

Winston, a recipient of the scholarship since fifth grade, credits the program for his academic success. This morning, he quickly established a rapport with Sen. Tim Scott, R-S.C., who testified at the hearing. Winston said he enjoyed the hearing, especially the political debate between Republicans and Democrats.

“It’s a very important experience for our students to see what goes on and how different decisions are made,” Winston said. “It’s a positive and uplifting experience to see how our lives are being changed.” Many D.C. scholarship recipients attend private Catholic schools like Archbishop Carroll, giving students and their parents an opportunity to observe a unique civics lesson on an issue that’s particularly personal.

House Oversight and Government Reform Chairman Jason Chaffetz, R-Utah, convened the field hearing at a time when the future of the program is once again being debated.

In this year’s budget proposal, the Obama administration has proposed eliminating funding for new scholarships. The Republican-led Congress is expected to counter that move later this year in legislation that would reauthorize the program.

Students got a first-hand glimpse of the debate this morning.

Rep. Elijah Cummings, D-Md., and Del. Eleanor Holmes Norton, D-D.C., voiced opposition to the program, at times prompting the auditorium to react unfavorably to their comments.

.@RepCummings:I don't understand how anyone can claim 2 b promoting the edu. of our children whn they are slashing billions frm edu. funds.

Norton called the program “undemocratic” and an “abuse of power” and asked Congress to let the District of Columbia decide how the money should be spent. She said current students should be allowed to continue receiving their scholarships, but wants to eliminate any future funding.

Private school vouchers shouldn't be imposed on DC by Congress. Our home-rule alternative to DCPS is a thriving public charter school system

Scott, who shared his own personal journey and story about dropping out of high school, offered a different vision. He encouraged lawmakers to look beyond their party labels to focus on what’s best for students. Families who participate in the program have an income under $21,000 on average, he said.

“When parents have better choices, their kids have a better chance,” Scott said.

The Republican senator cited data showing that students are better off when given the opportunity of school choice. The hearing featured testimony from two scholars and two beneficiaries, a parent and former scholarship recipient.

Shirley-Ann Tomdio, 19, who currently attends George Washington University, told The Daily Signal she was honored to represent scholarship recipients at the hearing.

“These limitations that we have, whether it be financial or racial background, shouldn’t come in between us getting a great opportunity to learn and to achieve,” she said.

Her parents came to the United States from Cameroon. Her father, Ernest, attended the hearing with his wife. Three of his children have received scholarships.

“I’ve been fighting for the program since day one,” Earnest told The Daily Signal. “The program works. Before my kid went to private school, I fought for it. The door should be open to everyone.”