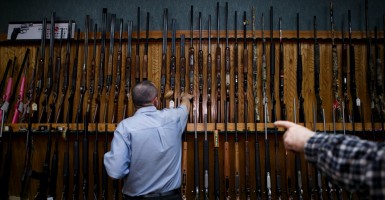 A small business owner from Central Florida alleges she was denied service by one of the largest banks in the United States strictly because she sells guns.

“It’s a slap in the face,” Peggy Craig, owner of Michael’s Pawn and Gun in Fruitland Park, Fla., told The Daily Signal in an exclusive interview. “It affects my livelihood, it affects how I feel, and I think it’s total bias and discrimination.”

On May 7, Craig called TD Bank seeking a new line of credit to buy inventory and produce advertisements for her small, 23-year-old storefront, Michael’s Pawn and Gun.

When a TD Bank representative pulled up the shop’s Facebook page and discovered that it sells guns, Craig says the representative told her, “We can’t lend to anyone who sells firearms.”

“The phone call probably didn’t even last two minutes, at best,” Craig said. “She hadn’t even got to things like Social Security numbers or income … it was just [asking for my] address and how many years we’ve been in business.”

Once she discovered Craig sold guns, “It was boom, end of conversation,” Craig said. In response to an inquiry from The Daily Signal, TD Bank says it has no blanket policy against the gun industry.

Craig’s account follows similar stories of banks across the United States refusing to do business with people in the firearms, ammunition and pawn industries.

>>> Read More: SunTrust Won’t Do Business With a Florida Gun and Pawn Shop

SunTrust is open about its policy to block service to three legal enterprises—payday lenders, pawn shops and dedicated check-cashers.

The bank says it owes its policy to “compliance requirements.”

Some Republican lawmakers allege that banks like SunTrust are actually following guidance handed down to them by federal regulators.

“Federal regulators have created an environment for banks that forces them to turn away legal law-abiding business that bureaucrats disagree with for fear of investigation or increased scrutiny—both of which carry high costs and regulatory hurdles,” Rep. Dennis A. Ross, R-Fla., told The Daily Signal.

Ross, along with a group of Republicans on the House Financial Services Committee, is investigating the trend of banks terminating relationships with entirely legal and legitimate industries.

Investigations have tied this “overreach” to a Justice Department program known as Operation Choke Point. The program was created to reduce fraud by “choking” fraudsters out of financial services.

To execute the program, the Justice Department partnered with banking regulators such as the Federal Deposit Insurance Corporation to pressure banks out of doing business with industries that are considered “high risk” for fraud.

Critics say that although Operation Choke Point began with laudable intentions, it has hurt a range of legal business owners whose industries are labeled “high risk” by regulators—like firearms dealers, pawn shops and money services businesses.

Democrats, on the other hand, are more skeptical about the negative impacts of Operation Choke Point and believe the tactics are necessary to prevent fraud.

>>> Read More: Republicans to Government: Why Has No One Been Fired Over Operation Choke Point?

“Fraudulent transactions are a real issue not to be taken lightly,” Rep. Al Green, D-Texas, said during a March hearing on the program. “That’s what [Operation Choke Point] is really about … protecting consumers.”

For Craig, who grew up hunting, being shut out from banks because she sells guns is personal.

“It’s a slap in the face that I’m a criminal,” she said. “I’m a bad person because I sell a firearm. … That’s the way I feed my family, that’s the way my son feeds his family. It’s through this business.”

And the affects are just as real, she says.

“It could totally put me out of business,” Craig said. “If I can’t get a loan, I can’t get inventory and I can’t get advertisements. I might as well shut my doors. And that’s what they’re trying to do—shut us down.” Larry Keane, vice president of the National Shooting Sports Foundation, has been observing banks’ relationships with the firearms and ammunition industries for years.

“We’re not sure if this is necessarily Operation Choke Point or just an example of discrimination against our industry,” he said of Craig’s case.

Whatever the real reason, this is why we’re pushing the FIND Act because the net effect for us is the same—discrimination against the lawful, and constitutionally protected, commerce in firearms and ammunition products.

The FIND Act—also known as the “firearms industry nondiscrimination act”—prohibits companies from refusing service “solely because a person … is engaged in the lawful commerce of firearms or ammunition products.”

Victims of these “unlawful discriminatory practices” would be able to file a civil lawsuit against the person who committed the “offense.”

Already, state legislators in Kansas and Alabama introduced the bill for consideration.

On a national level, a group of Republicans have been pushing for measures to end Operation Choke Point completely, either by passing legislation or prohibiting any federal dollars from being used to carry out the program.

Ross says Congress must “continue to conduct thorough oversight to root out and end this unacceptable overreach.”

Craig, now 68 years old, is hopeful of those efforts, but she still keeps a list of “banks to avoid” in her file drawer.

“It’s not like I opened yesterday,” she said. “I’m angry at the system, I’m angry at the people who want to take away our gun rights and who don’t know anything about a firearm.”