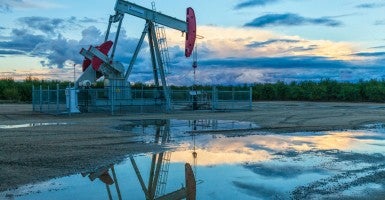 A pumpjack and surface water at oil well and fracking site. (Photo: Peter Bennett/Citizen of the Planet/Newscom)

Foreign policy should work to advance a constructive agenda—something that’s been largely lacking in the Obama era. Hopefully, the next president will come up with appropriate actions to fill that void. As a cornerstone of that effort, I would suggest a commitment to promoting free trade and more liberal markets worldwide.

I’ve written before that the next president will need a “kick starter” agenda—one that demonstrates that the United States is back in the business of protecting its own interests. But Washington will need to go beyond that. The static defense of interests is a sterile and ultimately, unsatisfactory role for a global power. Lack of leadership leaves a vacuum that competitors are only too happy to fill.

A fresh focus on free-market policies will require stepping out with more nimble and bold initiatives, rather than slogging through the ponderous procedures used to hash out high-profile multistate trade agreements or plowing through the bureaucracy of international and multinational trade regimes.

In about six years, President Obama has signed legislation implementing only three bilateral free trade agreements (with Korea, Colombia and Panama)—and those pacts were largely negotiated by his predecessor. Not only has he done little else to advance free trade, he has largely failed to garner support for free trade within his own party.

Yet it appears as though Obama wants to close out his tenure by making a splash on the trade front. He is seeking Trade Promotion Authority (which would also extend to the next president), as well as congressional approval of the Trans-Pacific Partnership, a twelve-nation trade pact.

Even if he pulls his agenda off, this could well be the swan song of big U.S. trade deals. As The Wall Street Journal’s Greg Ip argues: TPP could “lay down rules for the rest of the world in sectors such as services and intellectual property where nontariff barriers are especially onerous.” That will particularly impact the services sector.

Currently, “services” exports represent a fraction of national GDP and are dominated by a handful of businesses. But that could change. “There is great untapped potential for more,” writes Catherine Rampell, “since all of these exports are being sold from a tiny share of all the American companies that could participate in the global marketplace.” But, at best, this expansion won’t yield real results until after Obama is long gone.

Further, free trade advocates remain unconvinced that President Obama is serious about free trade. His zeal for Trade Adjustment Authority shows he really does believe government, not the marketplace, should be picking winners and losers. In practice, TAA gives an administration the power to hand out benefits to virtually any firm it wishes—even if the company is only loosely affected by foreign competition. This is pure cronyism. Worse, TAA doesn’t even work. There is little evidence it benefits workers displaced by foreign competition.

The Path to Expanding Economic Freedom

The next president would do well to make a strong, pro-growth, free-market agenda a cornerstone of his or her foreign policy.

Step #1: Make the Principled Case for Free Trade and Liberal Markets. Simply cheerleading for individual deals at hand, as Obama has done, conveys no sense of commitment to free trade. A president should speak often about the advantages of liberalizing global markets. Anti-free traders seize any ill consequence in markets to trash free trade and offer up protectionist measures or cronyism as some kind of “caring” alternative. A leader should not leave these attacks unchallenged. What’s required is a bold and consistent narrative from the White House of the benefits of free trade, such as: its impact on individual states, the value of imports to the national economy, the realities of outsourcing and the salutary effects of economic growth on the environment. The White House must lead to rebuild a national bipartisan consensus acknowledging the cumulative benefits of free trade and liberalizing markets.

Step #2: Adopt a Free-Market Export Energy Agenda. No initiative has greater prospects of boosting the American economy and reinforcing the goals of U.S. foreign policy than the aggressive export of energy. From natural gas to oil, coal, nuclear energy and associated energy technologies, the United States has the capacity to fundamentally liberalize global energy markets.

Step #4: Make Unilateral Reductions in Tariffs. “Since 2004,” notes Bryan Riley, a trade analyst at The Heritage Foundation, “over half of all U.S. imports have been ‘intermediate goods’ ranging from aircraft parts to oil to zinc.” Domestic manufacturers rely on these imports to create American jobs and to compete in the global marketplace. As a result, tariffs on these goods drive up manufacturing and consumer costs of U.S.-made goods and lower domestic profits. The next administration should make the case for eliminating tariffs on intermediate goods and pair that initiative with the ongoing congressional effort to extend the Generalized System of Preferences, a trade program that removes tariffs on nearly 5,000 products from 126 developing countries.

Step #5: Bring Economic Freedom to the Arctic. The next president will take office while the United States still has several months left in its two-year term as head of the Arctic Council. The new presidential team should make the most of this opportunity to promote responsible economic development in an environmentally sensitive, but increasingly important, theater of economic activity.

Step #6: Rethink the Transatlantic Trade and Investment Partnership. The European Union is much more interested in “harmonizing” regulatory practices than in promoting free trade and liberalizing markets. There is, therefore, every reason to be skeptical that a comprehensive agreement will deliver real economic benefits to the United States. As a first step, the next president ought to hit the pause button, conduct a thorough review of U.S. negotiating policies, and then determine the best course forward. Further, if key countries, such as Great Britain, drop out of the EU, the United States should immediately move to strengthen transatlantic economic ties with these countries.

Step #7: Pursue Individual Free Trade Agreements With Strategically Relevant Countries. The countries most likely to benefit from FTAs with the United States are developing nations weaning themselves off protectionist economies. The United States should target nations where promoting economic growth and bilateral relations are a priority for U.S. interests. One such country is Tunisia, a nation that can play a critical role in bringing stability and economic development to North Africa. Expanding economic ties with key Asia-Pacific nations ought to be another priority.

There are many other initiatives an administration could take to promote economic freedom at home and abroad, but starting with this handful of steps will set the proper tone and character for a new foreign policy, delivering strategically meaningful results while fostering a stronger, more self-confident American economy.