The Death of the Green Energy Movement 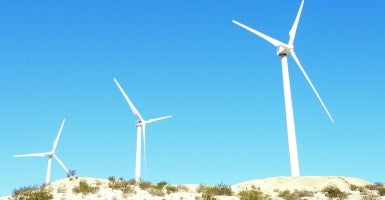 The green energy movement in America is dead. May it rest in peace. No, a majority of American energy over the next 20 years is not going to come from windmills and solar panels. One important lesson to be learned from the green energy fad’s rapid and expensive demise is that central planning doesn’t work.

What crushed green energy was the boom in shale oil and gas along with the steep decline in the price of fossil fuel that few saw coming just a few years ago.

A new International Energy Agency report concedes that green energy is in fast retreat and is getting crushed by “the recent drop in fossil fuel prices.” It finds that the huge price advantage for oil and natural gas means “fossil plants still dominate recent (electric power) capacity additions.”

Most of the government experts—and many private investors too—bought into the “peak oil” nonsense and the forecasts of fuel prices continuing to rise as we depleted the oil from the Earth’s crust. Oil was expected to stay way over $100 a barrel and potentially soon hit $200 a barrel. National Geographic infamously advertised on its cover in 2004 “The End of Cheap Oil.”

Barack Obama told voters that green energy was necessary because oil is a “finite resource” and we would eventually run out. Apparently, Obama never read “The Ultimate Resource” by Julian Simon which teaches us that human ingenuity in finding new resources outpaces resource depletion. The shale revolution is a classic disruptive technology advance that has priced the green movement out of the competitive market. Natural gas isn’t $13, but is now close to $3, an 80 percent decline. Oil prices have fallen by nearly half.

Green energy can’t possibly compete with that.  Marketing windpower in an environment of $3 natural gas is like trying to sell sand in the Sahara. Instead of letting the green energy fad die a merciful death, the Obama administration only lavished more subsidies on the Solyndras of the world.

Washington suffered from what F.A. Hayek called the “fatal conceit.” Like the 1950s central planners in the Politburo, Congress and the White House thought they knew where the future was headed. According to a 2015 report by the Taxpayers Protection Alliance, over the past 5 years, the U.S. government spent $150 billion on “solar power and other renewable energy projects.” Even with fracking changing the energy world, these blindfolded sages stuck with their wild green-eyed fantasy that wind turbines were the future.

Meanwhile, the return of $2.50 a gallon gasoline at the pump is flattening the battery car market. A recent report from the trade publication Fusion notes: “electric vehicle purchases in the U.S. have stagnated.” According to auto analysts at Edmunds.com, “only 45 percent of this year’s hybrid and EV trade-ins have gone toward the purchase of another alternative fuel vehicle. That’s down from just over 60 percent in 2012.”

Oil production from 2007-2014 grew by more than 70 percent and natural gas production by nearly 30 percent.

Edmunds.com says that “never before have loyalty rates for alt-fuel vehicles fallen below 50 percent” and it speculated that “many hybrid and EV owners are driven more by financial motives rather than a responsibility to the environment.” That’s what happens when the world is awash in cheap fossil fuels.

This isn’t the first time American taxpayers have been fleeced by false green energy dreams. In the late 1970s the Carter administration spent billions of dollars on the Synthetic Fuels Corporation which was going to produce fuel economically and competitively. Solar and wind power were also brief flashes in the pan. It all crash landed by 1983 when oil prices crashed to as low as $20 a barrel after Reagan deregulated energy. The Synthetic Fuels Corporation was one of the great corporate welfare boondoggles in American history.

A lesson should have been learned there—but Washington went all in again under Presidents Bush and Obama.

At least private sector investors have lost their own money in these foolish bets on bringing back energy sources from the Middle Ages—like wind turbines. The tragedy of government as venture capitalist is that the politicians lose our money. These government-backed technologies divert private capital away from potentially more promising innovations.

Harold Hamm, president of Continental Resources, and one of the discoverers of the Bakken Shale in North Dakota tells the story of meeting with Barack Obama at the White House in 2010 to tell him of the fracking revolution. Obama arrogantly responded that electric cars would soon replace fossil fuels. Was he ever wrong.

We don’t know if renewables will ever play a significant role in America’s energy mix. But if it does ever happen, it will be a result of market forces, not central planning.