26 States Have Been Forced by Courts to Allow Gay Marriages 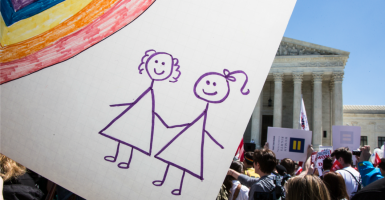 In 2004, voters in Michigan and 10 other states passed state constitutional amendments defining marriage as the union of one man and one woman.

But just eight months later, the 6th Circuit Court overturned that decision, ruling that Michigan’s law—and similar marriage laws enacted by Ohio, Kentucky and Tennessee, the three other states under the court’s jurisdiction—were indeed constitutional. The judges writing that decision noted: “Our judicial commissions did not come with such a sweeping grant of authority, one that would allow just three of us, just two of us in truth, to make such a vital policy call for the 32 million citizens who live within the four states of the 6th Circuit.”

The U.S. Supreme Court took up the case recently, and now the question is whether nine judges (or just five to be more accurate) will express the same humility as the 6th Circuit or will they instead determine they do have the sweeping authority to make such a decision for more than 300 million American citizens who live in all 50 states?

In only three states has marriage been redefined by popular vote. That means that of the 37 states that recognize same-sex marriage, only three do so because the citizens of that state voted for it. Eight states changed the definition of marriage through their state legislatures, and 26 states have been forced to do so by courts.

Take a look at the national popular vote. Over the last 10 years, this issue has been on the ballot 39 times in 35 states. The number of votes in favor of traditional marriage? 51,483,412. The number of votes in favor of same-sex marriage? 33,015,412. As attorney John Eastman of the National Organization for Marriage rightly concludes, “That’s a vote margin of 60.93 percent to 39.07 percent, a landslide in American politics.”

One might also point out that the belief that marriage is the union of one man and one woman has been a landslide decision across the millennia of human history.

There are a host of reasons one can give for being for or against changing the definition of marriage. But of those who believe nine judges can settle such a contentious cultural matter once and for all, I would ask them to recall a similar decision made by the high court over 40 years ago called Roe v. Wade. Does anyone believe the matter of abortion is “settled” public policy in this country? To the contrary, the issue of abortion is more contested today, at both the state and federal levels, than ever before. A court decision forcing all 50 states to redefine marriage would be no different.

John Bursch, the attorney representing the state of Michigan, included this line of reasoning in his arguments: “When people have to act through the democratic process, it forces neighbors to sit down and civilly discuss an issue and try to persuade each other through reason, love and logic. … When you enact social change of this magnitude through the federal courts, it’s cutting off that dialogue and it’s saying one group gets their definition and the other is maligned as being irrational or filled with animus. And that’s not the way that our democratic process is supposed to work and there are long-term harms to our country and to that fundamental liberty interest to govern ourselves.”

Proponents of same-sex marriage insist that public opinion polls indicate most Americans are in favor of redefining marriage—and that their ranks are growing by the day. If that’s the case, why not let those citizens speak for themselves via the ballot box? Let all Americans have a say in this issue, as opposed to having a handful of judges make the decision for them.

Originally published in The Detroit News