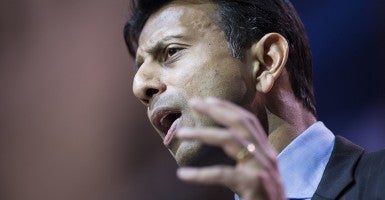 'I think we need to phase it out,' Louisiana Gov. Bobby Jindal says of the 81-year-old agency. (Photo: Brendan Smialowski/AFP/Getty Images/Newscom)

Bobby Jindal has become the latest Republican presidential hopeful to call for the end of a federal agency that makes taxpayer-backed loans to foreign businesses and countries to buy U.S. products.

“I don’t like … the federal government saying we’re going to decide which companies, which countries to select to help,” the Louisiana governor said, talking about the Export-Import Bank in an appearance Wednesday on conservative commentator Hugh Hewitt’s radio show.

“I actually think we need to phase it out,” Jindal said of the obscure, 81-year-old agency known as Ex-Im, whose latest extension of life by Congress is set to end June 30.

The remarks won Jindal praise Thursday from Arlington, Va.-based Freedom Partners, a coalition of business leaders and campaign donors who view the agency as a choice example of corporate cronyism that disrupts free markets.

“We applaud Governor Jindal [for] taking a principled stand for taxpayers and against corporate welfare at the Export-Import Bank,” Freedom Partners spokesman James Davis said, adding: “We urge members of Congress to join Governor Jindal and other principled leaders who want to see this outdated New Deal program expire on June 30.”

A group of conservative House members recently came out against Ex-Im, noting that the agency failed to comply with reforms mandated when Congress previously reauthorized it, as well as 31 open fraud investigations.

As The Daily Signal previously reported, a former Ex-Im loan officer, Johnny Gutierrez, was indicted and pleaded guilty to accepting bribes on 19 occasions between 2006 and 2013. Lawmakers opposing reauthorization have cited the criminal charges and the possibility of more indictments in the other fraud probes.

Freedom Partners is affiliated with billionaire entrepreneurs and philanthropists Charles and David Koch. The Kochs recently signaled their interest in endorsing and contributing money to a single Republican candidate for the White House before the party’s nominating convention in July 2016 in Cleveland.

Former Texas Gov. Rick Perry, another likely 2016 candidate, reversed his longstanding position on Ex-Im this week, announcing in a Wall Street Journal op-ed that he would support its closure.

Freedom Partners also praised Carly Fiorina, the former business executive who entered the GOP race May 4, for her opposition to the bank.

Already on the record as ready to phase out the bank or pull its plug are three official GOP candidates for president—Sens. Ted Cruz of Texas, Rand Paul of Kentucky and Marco Rubio of Florida—and two expected candidates: Wisconsin Gov. Scott Walker and former Florida Gov. Jeb Bush.