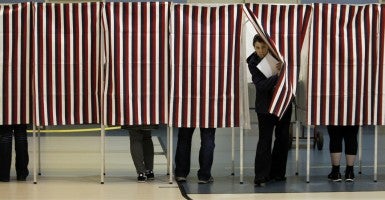 A New Hampshire voter exits a polling booth after filling out her ballot for the midterm election. (Photo: Matthew Healey/UPI/Newscom)

A bill has been passed by the New Hampshire state Senate that would require voters to reside in the state for 30 days before becoming eligible to vote.

Senate Bill 179 was passed by the Republican-controlled state Senate in a party-line vote, and is currently in committee in the House.

New Hampshire law currently permits same-day voter registration. The legislation would amend the way the state defines “domicile” to require that a voter reside in the Granite State for “no less than 30 consecutive days” before they become eligible to cast a ballot.

Supporters argue that a residency requirement would reduce voter fraud.

The New Hampshire Republican Party has launched a petition in support of the legislation.

Jennifer Horn, the chairman of the New Hampshire Republican Party, told The Daily Signal that thousands have signed it.

“A 30-day residency requirement to vote in New Hampshire is appropriate, and polls show overwhelming support for this approach,” said Horn. “Instead of supporting this reasonable legislation, Gov. Maggie Hassan and her allies are more concerned with peddling divisive rhetoric and pushing policies that undermine confidence in our electoral process.”

Opponents of the bill argue that a 30-day residency requirement restricts voting rights.

“Once again, when New Hampshire Republicans can’t win on the issues, they seek to disenfranchise voters,” Ray Buckley, the chairman of the New Hampshire Democratic Party, told the Union Leader. “Granite Staters will not stand for these blatantly partisan attempts to make it harder for New Hampshire citizens to cast a ballot.”

According to the National Conference of State Legislatures, few states allow same-day voter registration, and most require that voters register by a deadline preceding an election, “with most falling between eight and 30 days before the election.”

“This is a good move by New Hampshire to restore integrity to its election process,” said von Spakovsky.

“Only about a dozen states allow same-day registration, a process that makes it impossible for election officials to verify the accuracy of registration information,” he continued. “This allows individuals who are not really residents of the state to engage in drive-by-voting. All other states have some type of waiting period, ranging from 10 days up to a 30 days maximum.”

“This will not prevent any legitimate voters from voting,” he added.