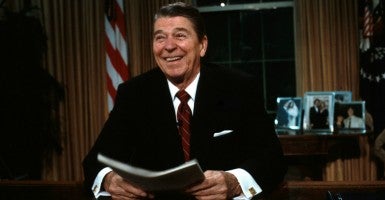 Here’s some advice to the White House: it might be time for President Obama to cancel the rest of his economic “mission accomplished” tour and help figure out how to get the U.S. growing again.

The Department of Commerce delivered the miserable news Wednesday morning that economic growth nearly ground to a halt during the first quarter, up a microscopic 0.2 percent. Even more disturbing, because the population is growing at about 0.8 percent, real per capita GDP is actually negative. Remember we also had an abysmal jobs growth number for March.

Once again economists blamed the frigid and blizzard conditions on the East Coast; and no doubt weather was a factor in the subpar performance.

But this is a long-term pattern under Obama, not a seasonal blip. Back in 2009, Vice President Biden promised us a “Summer of Recovery” and nearly six years later we are all still eagerly waiting for it.

The tepid growth rate so far in 2015 merely extends the track record of the 23 quarter post-Great Recession recovery. The annualized growth rate of 2.24 percent dead last compared to the six other recoveries since 1960, which averaged 3.97 percent after 23 quarters. This translates into nearly $1.7 trillion (in constant 2009 dollars) in absent economic growth.

But the more amazing comparison is that of the Reagan—which trounces this current so-called recovery. That recovery’s sizzling 4.8 percent annualized growth through 23 quarters was more than twice the rate of the current recovery. In other words, for every $1 of economic growth experienced during the present time, the Reagan recovery produced more than $2. As a result, the Reagan recovery gap now stands at a record $2.48 trillion of real annual GDP (in 2009 dollars). The economy is now more than 15 percent smaller than it would have been with Reagan style growth.

This didn’t happen by accident. The Obama policies (as well as those in the final months of the George W. Bush administration) were, almost without exception, costly and counterproductive. Congress and Obama pushed through $830 billion in stimulus spending—which was right out of the Keynesian economic playbook. Then the disciples of Lord Keynes expanded the assets of the Federal Reserve by $3.5 trillion dollars during three rounds of so-called quantitative easing. These trillions of newly created dollars flowed into the credit markets, to the banks, and into the mortgage-backed securities industry. Like a cheap sugar high, economic growth seemed to temporarily respond.

The federal minimum wage rate was raised by more than 10 percent. Then came Obamacare and its new regulations and costs on employers for mandated health care. Next were the tax increases on the rich. The Environmental Protection Agency went on a regulatory search and destroy mission against American fossil fuel producers—and that mission continues unabated to this day.

Bad ideas have bad consequences. What is especially demoralizing is that after this flurry of program spending in Washington, all we have to show for it is $7.5 trillion more debt.

Obama suggested earlier this week that if Republicans hadn’t blocked his further spending ambitions for more social programs and “investments in infrastructure” projects, the rioting in Baltimore might have been averted. Really? Can our economic problem truly be that we aren’t spending and borrowing enough money in Washington?

Meanwhile, almost all economists agree we need to reduce our corporate tax rate. We could create hundreds of thousands of more jobs by encouraging domestic drilling for oil and gas rather than preventing it—through the EPA and the moronic decision to delay the Keystone XL pipeline. Fixing the ObamaCare anti-hiring rules would also boost growth. Those are the easy things—and even they can’t get done in this White House.

We reject the fears that America is headed into another recession. Expect a bounce back this quarter. But we’re stuck in a slow growth rut that is holding back American potential and hurting those at the bottom of the ladder the most. As John F. Kennedy used to put it: “We can do bettah.” Yes, much bettah.
Originally published on Fox News.