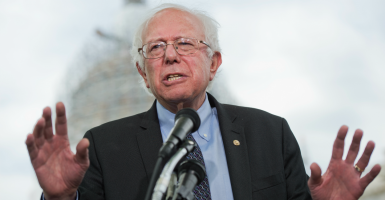 Sen. Bernie Sanders, who has represented Vermont as an independent in the House and Senate for nearly 25 years, has provided Hillary Rodham Clinton with a challenger for the Democratic nomination for president.

In his characteristic get-to-the-point style, Sanders earlier this week skipped over a formal declaration of candidacy – he had hinted at it for months – and instead identified ordinary working Americans as the reason he is running.

“This country today has more serious crises than at any time since the Great Depression of the 1930s,” Sanders, 73, said in remarks lasting less than five minutes. “For most Americans, their reality is they’re working longer hours for lower wages. In inflation-adjusted income, they’re earning less money than they used to years ago despite a huge increase in technology and productivity.”

Signaling that he intends to press the “income inequality” issue, he added:

How does it happen that the top 1 percent owns almost as much wealth as the bottom 90 percent? And my conclusion is that that type of economics is not only immoral, it’s not only wrong, it is unsustainable. It can’t continue. The main issue is, how do we create an economy that works for all of our people rather than a small number of billionaires?

His second key issue, Sanders added, is reforming a campaign finance system that allows “billionaires” to “buy elections and candidates.”

Sanders, who caucuses with the Democrats but calls himself a “democratic socialist,” acknowledged that questions about foreign or undisclosed donations to the Clinton Foundation is a legitimate issue. He insisted, however, that the bigger issue is the “huge amount” of money in politics. He limited other comparisons to Clinton to noting that, unlike her, he opposed entering the war in Iraq and is a veteran opponent of trade pacts that he said have “horrendous” effects on U.S. workers.

“We’re in this race to win,” he insisted.

Here are some facts about the senator who described himself as “a guy who indisputably has the most unusual history of anyone in the U.S. Congress.”

2. He was the third socialist ever elected to Congress. His 16 years in the House before his election to the Senate in 2006 make him the longest-serving “independent” in American history.  He previously was affiliated with the Liberty Union Party, which opposed the Vietnam War. http://www.sanders.senate.gov/about

3. He moved to Vermont in 1964.  He was born in Brooklyn, where he went to high school and Brooklyn College. He headed to Vermont after graduating from the University of Chicago with a bachelor’s degree in political science.

4. While in college, he marched for civil rights. Sanders, an organizer for the Student Nonviolent Coordinating Committee, was part of a contingent of students from Chicago who traveled by bus in 1963 to the March on Washington for Jobs and Freedom.

5. He was elected mayor of Burlington the first time by 10 votes.  After that 1981 contest, he went on to win three more terms. This local success followed failed bids for Senate and governor in the 1970s.

6. He once spoke on the Senate floor for eight hours straight. It was December 2010, and he was trying to undo what he considered tax breaks for the rich.

7. He lists 18 priorities on his Senate web site. They include civil liberties, dental care, war and peace, and women’s rights.

8. His older brother, Larry, is running for a seat in the UK’s Parliament. A resident of Oxford since 1969, Larry Sanders is a Green Party candidate in the May 7 election for Oxford West/Abingdon but is given little chance of unseating Conservative Party incumbent Nicola Claire Blackwood.

9. He shares with some conservatives a deep suspicion of government threats to privacy.  In fact, Politico noted, on that topic Sanders sometimes sounds much like Sen. Rand Paul, R-Ky., the candidate rated most conservative by some guides.

10. He’s pretty “social” for a senior.  Sanders (or a staff surrogate) maintains a scrappy presence on social media such as Twitter and Facebook.

11. The former war protester is wary of America being “sucked into a quagmire” to fight ISIS. “This is not just an American problem,” he said of the brutal terrorist group before last fall’s elections. “This is an international crisis. … This is a war for the soul of Islam, and the Muslim nations must be deeply involved.”

12. He considers himself a champion of veterans. Last year, when he was still chairman of the Veteran Affairs Committee, he sought to add $50 billion in new spending on veterans’ health programs.

13. He remains a Senate player in budget deliberations. After winning some additions to the Republican spending plan, he  denounced the final package as a “rich-get-richer approach.”

14. He asked President Obama to raise taxes without Congress. In a letter to Obama, Sanders said the president should “act on his own” to close tax loopholes for “the most profitable corporations.”