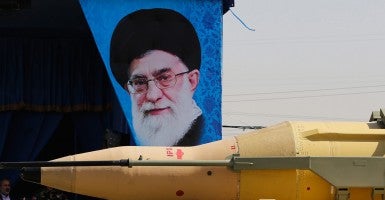 The Senate must review whatever deal the Obama administration strikes with Iran to delay its gaining a nuclear weapon, Sen. Marco Rubio said this morning, arguing that “a bad deal almost guarantees war.”

The Florida Republican said Israel won’t accept an agreement that doesn’t recognize its right to exist, and shouldn’t have to, provoking applause.

“The argument the White House uses [to garner Democrats’ support] is that if you are not in favor of this agreement, you are in favor of war,” Rubio said. “I would argue a bad deal almost guarantees war because Israel is not going to abide by any deal that they believe puts … their existence in danger.”

Rubio, who announced April 13 that he is running for president, said other Middle East nations including Saudi Arabia will want their own nuclear weapon if they see Iran’s getting one as only a matter of time.

He also said the final deal “has to mirror the fact sheet” the administration put out when a framework was struck with the Iranians. It is “incredibly worrisome,” he said, that the White House rejects that idea. Rubio, a member of the Senate Foreign Relations Committee, talked about Iran at some length during a half-hour question-and-answer session at the Ideas Summit hosted by the National Review Institute in Washington, D.C.

Asked whether there is any chance Iran won’t cheat on a final deal, Rubio quickly replied: “No.”

The greatest obstacle to a legitimate deal, he said, is that Iran is controlled by “radical Shia clerics who believe that it is morally acceptable to lie” and “accept the benefits of any deal but don’t necessarily feel bound by any of its restrictions.”

Iran’s “play,” Rubio said, is to win the lifting of billions of dollars worth of international sanctions, stall inspections, increase its ability to attack the West through proxies such as Hezbollah, strengthen its military capability and stabilize internally.

Then, he predicted,  banking on the West’s “very short attention span,” Iran will announce within eight years or so that it has been forced by the actions of its enemies to build a nuclear weapon.

By that time, Rubio said, European nations will not want to upend business deals by re-imposing sanctions and the U.S. at home and abroad will be more vulnerable to attack by a stronger Iran.