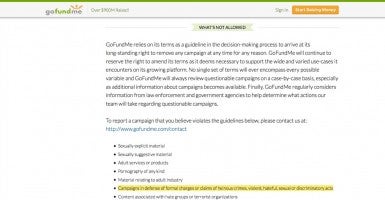 The popular crowdfunding website, GoFundMe, quietly changed its public policies Wednesday after coming under scrutiny for shutting down a campaign setup for the Christian bakers facing a $135,000 fine for refusing to bake a cake for a same-sex wedding.

GoFundMe announced the change in a blog post titled, “Protecting Our Community.”

On Wednesday, The Daily Signal captured a screenshot of the website’s old policy.

The difference in the wording of the policy is significant because neither the Christian bakers—Aaron and Melissa Klein—nor the Washington florist who also had her account shut down broke any criminal laws.

Instead, both businesses were found guilty of violating civil anti-discrimination laws.

“GoFundMe has the freedom to make their own policies and do business with whom they choose. That’s what makes it so ironic and hypocritical that GoFundMe has done the bidding of a movement that wages war against this same freedom,” Greg Scott, a spokesman for Alliance Defending Freedom, a legal organization that assists in cases like the Kleins, told The Daily Signal.

GoFundMe has facilitated fundraising for inane things like sending a man to a stranger’s bachelor party, but have now cut off families who face financial ruin and who’ve had their fundamental freedoms obliterated by unjust government action. If there is a better example of a company and culture with its priorities and loyalties completely upside down, I can’t think of it.

When The Daily Signal previously reached out to GoFundMe to ask what policy the “Sweet Cakes by Melissa” and “Arlene’s Flowers” campaigns violated, the company stated:

Campaigns created for the benefit of individuals facing formal charges of discriminatory acts, or dealing with the resulting legal ramifications, as determined by local laws within the state in which they reside, will not be permitted to fundraise on GoFundMe.

It appears that this statement ran in conflict with its own terms and conditions, triggering GoFundMe to update its policies.

In a statement Wednesday, GoFundMe clarified that it, “relies on information from law enforcement and government agencies to help determine what actions our team will take regarding questionable campaigns.”

The decision to shut down campaigns for Sweet Cakes by Melissa and Arlene’s Flowers triggered national attention from both sides of the marriage debate. Critics of GoFundMe’s decision to yank the campaigns questioned the company’s decision.

GoFundMe keeps 5 percent of donations made through its fundraising campaigns.