How the ‘Right to Love’ Is Creating Hate 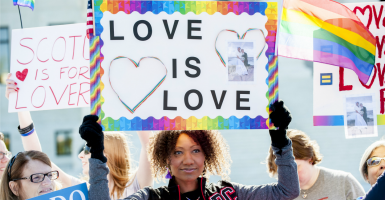 A protester at the Supreme Court Tuesday. (Photo: Pete Marovich/UPI/Newscom)

While we are contending for our own liberty, we should be very cautious not to violate the rights of conscience in others, ever considering that God alone is the judge of the hearts of men, and to him only in this case they are answerable.  — George Washington, letter to Benedict Arnold, Sept. 14, 1775

Washington’s words and wisdom could certainly be applied to the situation America finds itself in today with the whole debate over the definition of marriage.

The Supreme Court heard arguments on the matter Tuesday and will hand down its decision sometime in June.

To get a better sense of how this issue is both similar and different from other cases involving religious liberty, and what is ultimately at stake, I spoke with an attorney who has worked on domestic and international religious freedom for over a decade defending the rights of people from a wide variety of faith backgrounds.

Due to the uproar that often occurs when one speaks out on this issue and to protect a project she is currently working on, she did not want her name disclosed.

How significant is the Supreme Court case heard this week on the definition of marriage?

I believe we are at a crossroads between religious liberty and “marriage equality.” In addition to changing the status of marriage, the Supreme Court’s decision may also irreversibly change the social contract between people of faith and the state as well as intensify divisions between Americans who support same-sex marriage and those who don’t.

How is the debate over the same-sex marriage issue different than previous cultural issues such as abortion?

Same-sex marriage presents a challenge like none other for many people of faith. Religious texts, like the Bible, do not make commandments about sexual purity higher than others. But the Lesbian, Gay, Bisexual, Transgendered (LGBT) movement imposes their views with greater force and threat of punishment than any other.

Proponents of no-fault divorce or abortion don’t enforce agreement. And on other issues where Americans strongly disagree, courts have created “conscientious objector” clauses (for example, for pacifists in war and pro-life medical professionals). They were wise enough to see that reserving space for disagreement would maintain unity.

Same-sex marriage advocates seem to have little regard for national unity. The principle E Pluribus Unum (“Out of many, one”) has guided our nation in times of great strife.

Leaders like President Lincoln, who heeded it, have moved our country forward as one. It is a bitter irony that the leaders of the “right to love” movement have fostered hate against so many people from so many different places, professions and races.

There have been numerous cases and stories erupting over this issue. What do you believe is the ultimate goal of proponents of same-sex marriage?

Advocates of “the right to love” have launched attacks including public intimidation, professional ostracization, economic sanctions, boycotts and threats of violence.

It was not only when the Southern Poverty Law Center listed the Family Research Council as a hate group and vigilante Floyd Corkins shot a Family Research Council employee, it was also when a Singapore law professor scheduled to teach a course on human rights at New York University Law School felt forced to cancel her classes because of the atmosphere of hostility created by some students who opposed her views on homosexuality.

It was when an Indiana supporter of same-sex marriage threatened arson against a restaurant when owners expressed qualms about serving at a gay wedding and when the CEO of Mozilla resigned after a backlash because he personally supported heterosexual marriage.

It was when the entire top tier of the nation’s law firms refused legal defense to advocates for heterosexual marriage and, most frighteningly, when local governments fined private business owners and fired civil servants.

In each of these cases, supporters of same-sex marriage demanded silence or cooperation from those who dissented.

Beyond the threat to national unity and free speech, you say the fallout from these cases has also been very personal for those involved.

Advocates of same-sex marriage paint themselves as David in a battle against Goliath. Is that accurate?

Not exactly. According to their claims, a majority of Americans, including a growing list of billionaires, support same-sex marriage.

If current trends continue, same-sex marriage will be legalized in more states, sexual identity/“marriage equality” will become protected under the 1964 Civil Rights Act and the U.S. will carry out Hillary Clinton’s promise to make LGBT rights a top foreign policy priority. These actions will further expand the states’ powers to penalize dissenters. Who will Goliath be then?

You also say there are many “overlooked victims” in this debate. Explain what you mean by that.

Same-sex marriage advocates have so demonized dissenters that they have forgotten those who their opponents serve. Nicholas Kristof cautioned that caricaturing Christians as bigots fails to take into account their compassion.

It is mercy that Pope Francis continues to urge Catholics to show [gays and lesbians] even as their “right to love” movement cuts off the church’s ability to extend mercy.

Today, foster children in Washington, D.C., can no longer be served by Catholic Charities, because it had to terminate services after same-sex marriage was legalized without a “conscience clause.” And if LGBT rights become a litmus test for foreign aid, faith-based charities overseas will be forced to curtail their services to the poor and needy.

What are the unacceptable choices you believe Christians and other people of faith are up against?

Commentators can’t seem to understand those who won’t conform or compartmentalize. The New York Times’ Frank Bruni asks why the Bible can’t be realigned to fit American popular opinion? And CNN’s Chris Cuomo asks, “Why can’t you be the Christian you want to be just with your own actions?”

In breaking away from the Presbyterian Church in the United States of America, 34,000 black pastors responded. “With this action (endorsement of same-sex marriage), the PCUSA can no longer base its teachings on 2,000 years of Christian scripture and tradition … ” The pastors believe, as do many across the globe, that the words of God should shape rather than reflect the world.

James Madison could have been addressing Cuomo when he wrote “Conscience is the most sacred of all property … ” He believed the “social pact” meant the state was committed to protecting a man’s conscience even more than his castle and that “public faith” in government depended on it.

Today, judges like those in New Mexico seem ready to discard this commitment. In Elane Photography v. Willock, a justice explained to Elaine Huguenin that memorializing a lesbian couple’s wedding (against her conscience) would be the new “price of citizenship.”

Final thoughts on this case and issue?

When the founders were at a crossroads between Madison’s view and the Puritans’ desire for total conformity at the expense of liberty, they chose to respect individual conscience. This choice has drawn oppressed peoples to our shores and held our country together for more than two centuries.

If the “right to love” movement continues to hate and punish their fellow citizens for following their consciences, they will tear this country apart. Will our highest court preserve freedom of conscience or force the new dissenters to self-censor or suffer the consequences? Our unity depends on it.