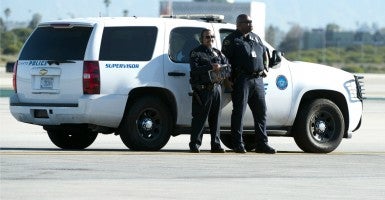 In a small number of cities clustered in Los Angeles County, Calif., people are seeing their property and money seized by law enforcement through civil asset forfeiture, and it’s making police departments tens of millions of dollars.

California has safeguards in place to protect innocent people from the harmful practices of civil asset forfeiture. However, a new report from the Drug Policy Alliance found that such measures haven’t stopped law enforcement agencies from using federal forfeiture laws to circumvent state policies.

The Drug Policy Alliance, an organization focused on drug policy reforms, examined the cities that lead California in seizures per capita. The cities—Baldwin Park, Beverly Hills, Gardena, Irwindale, La Verne, Pomona, South Gate, Vernon and West Covina—are all located around Los Angeles County and collected more than $43 million in revenue from forfeitures between 2006 and 2013.

The city of Irwindale, meanwhile, saw $802,800 in revenue from the Justice Department’s forfeiture program and has a population of 1,422.

According to the Drug Policy Alliance’s findings, law enforcement agencies in the California cities studied used revenue from civil asset forfeiture to pay for overtime, communications and computers, and to purchase and maintain vehicles. However, the money was also used to pay informants.

The La Verne Police Department alone spent $1 million of revenue gained from federal asset forfeiture on informants over the last three years, according to public records.

“Police cars and communications equipment may indeed be legitimate law enforcement expenditures, but those purchases should be justified to elected representatives just the same as every other government agency,” Jason Snead, research associate at The Heritage Foundation’s Edwin Meese III Center for Legal and Judicial Studies, told The Daily Signal.

“Law enforcement should not be a self-financing enterprise,” he continued. “That, of course, means that it is incumbent on governments to adequately fund their law enforcement agencies. And if agencies truly need larger budgets, the appropriate means for raising that revenue is taxes or offsets, not forfeiture.”

In examining data gathered through Freedom of Information Act requests and forfeiture reports at the state and federal level, the Drug Policy Alliance identified instances of Los Angeles County police departments budgeting for future forfeiture revenue, which is prohibited by the federal government.

The Drug Policy Alliance’s report focused on police departments participating in the Department of Justice’s Equitable Sharing Program, which allows local law enforcement agencies to team up with federal agencies to seize property under federal law. Under the program, local police departments receive a portion of the proceeds from seizures while the federal government keeps the rest.

In some instances, police departments keep up to 80 percent of assets’ worth, making the program more attractive in states with stringent state forfeiture laws. At the state level, law enforcement agencies see a 50 percent return on forfeiture.

“Equitable sharing certainly offers law enforcement the means to circumvent state laws which might make it harder to conduct forfeitures, or restrict how forfeiture funds are spent,” Snead said.

He went on to point out how states with strict forfeiture laws receive “higher payouts” through the Equitable Sharing Program than those with looser forfeiture laws.

“This certainly suggests that some law enforcement agencies are turning to the federal program to get around their state laws,” Snead said.

Snead noted that nationwide, more than $433 million was distributed to state and local law enforcement agencies through the Department of Justice’s Equitable Sharing Program last year.

Civil asset forfeiture is a decades-old tool that gives law enforcement the power to seize property if it’s suspected of being related to a crime.

Though the procedure started with good intentions—as a way to curb money laundering and drug trafficking—a trend of law enforcement agencies seizing property and money for profit has developed.

The issue has created an alliance in organizations such as The Heritage Foundation and the American Civil Liberties Union, which argue the practice stacks the deck against innocent property owners refuting forfeitures. The groups also believe civil asset forfeiture is counter to criminal justice system’s presumption of innocence and creates perverse incentives for law enforcement, as often the proceeds from seized property benefit police departments and prosecutors’ offices.

To eliminate abuses of civil asset forfeiture by law enforcement, the ACLU joined 23 groups calling on Congress to enact federal forfeiture reforms. In a letter to top lawmakers with the House and Senate Judiciary Committees sent earlier this month, the groups called on policymakers to end the Equitable Sharing Program, restore the Fifth Amendment right to due process and Sixth Amendment right to counsel, and direct forfeiture proceeds to the Department of Treasury’s general fund.

“Property rights and due process are fundamental American principles,” the letter stated. “Congress has an enormous opportunity to address civil forfeiture abuses that undermine property rights, due process and economic freedom.”