‘If the Russians Come, We Will Destroy Them’: Ukrainian Civilians Prepare for War 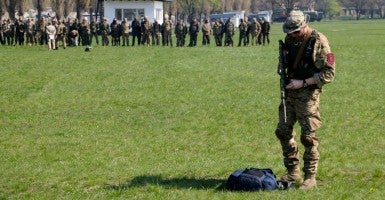 DNIPROPETROVSK, Ukraine—Outside this city at a Ukrainian army facility called the Polygon, which is typically used for tank training, about 200 civilian volunteers gathered this past weekend for a military exercise.

Many had no military experience; some had never held a weapon. But many decided to train for war due to widespread worries about an escalation in the Ukraine conflict and the potential for it to spread all the way to Dnipropetrovsk, which, with its nearly 1 million residents, is Ukraine’s fourth largest city.

“I’m here to protect my people, my town and my family,” said Daniel Kishlitsya, 20. “I’m very worried about the war coming here; I think it will get worse.”

The recruits ranged in age from 17 to 74 and came from all walks of life. They wore mismatched uniforms, which had either been bought off the Internet or supplied by local volunteer groups that equip soldiers for combat. Some wore hunting clothes or leather motorcycle jackets. Others had on tennis shoes.

The Ukrainian army sponsored the training as part of a program to develop civilian volunteer battalions to defend Ukraine’s major cities in the event the conflict spreads out of the Donbas or if there is an all-out Russian invasion. Once trained and armed, the volunteer units are responsible for defending key positions such as bridges and checkpoints.

The development of territorial defense battalions is part of a nationwide buildup of local defense groups—including other major cities such as Odessa, and Ukraine’s capital Kyiv—underscoring worries by both officials and civilians that the Ukraine conflict is set to resume and could significantly escalate.

“I’m not fighting against Russians, I’m fighting against the politics in Moscow,” said Valeriy Kosarev, 71, a volunteer soldier. “We are fighting for Russia’s future as well. I don’t hate Russians. But if they come here, this is my motherland and I will protect it.”

The civilian volunteer battalions (including units such as the Azov, Donbas and Aydar battalions) operated in coordination with regular Ukrainian units, but were not under Kyiv’s direct chain of command and had their own independent means of funding, training and weapons acquisition. This April, however, Kyiv announced that all volunteer battalions had been incorporated into the Ukrainian National Guard, and no unsanctioned volunteer battalions were left operating in the conflict area. While the newly incorporated units now officially fall under Kyiv’s control (personnel receive regular military pay and units are now supplied with armored equipment and tanks), the units still mostly operate autonomously and have sometimes-rocky relationships with regular army commanders.

Volunteer territorial defense units like those in Dnipropetrovsk are also being incorporated into the regular military’s official chain of command. Regular army officers, with the help of soldiers from the Ukrainian National Guard and other volunteers, run training and logistics.

In the event the territorial defense battalions were called into active service, they would be armed by the regular army and would fall under its chain of command.

Dnipropetrovsk’s volunteer forces comprise several units, including the “Guardians,” which is tasked with defending key positions such as bridges and checkpoints. The unit’s 38-year-old commander, who went by the nom de guerre “Armen,” said that with only two days to train new recruits, he focuses on priorities like discipline and “elementary soldier skills,” such as learning how to shoot and obey commands.

“These are just normal people who work and lead ordinary lives,” he said. “They’re not military. They’re only residents of the city, ready to defend it.”

Saturday’s training at the Polygon was a whirlwind.

Under the watchful eye of a few dozen instructors, all with recent combat experience in the Donbas, new recruits began with basic individual movement drills and instruction in how to properly carry and shoot Kalashnikov assault rifles. After less than an hour they were firing live ammunition. They also learned how to fire rocket-propelled grenades. And all afternoon the range was a noisy orchestra of small arms fire and the sound of RPGs launching and exploding as nervous recruits practiced under the watchful eyes of their instructors.

RPGs were consistently fired for hours, and each recruit was able to shoot through multiple magazines of ammunition, highlighting the large supply of small arms ammunition and weapons available to Ukrainian forces due to surplus Soviet-era stockpiles dating back to the 1970s and 1980s.

“We don’t need weapons,” Armen said. “We need training. If we get new equipment, it’s no good if people don’t know how to use it. Training is the most important thing for us.”

Despite the Feb. 12 cease-fire, fighting continues to rage daily in Ukraine, particularly in hot spots near the town of Pisky outside the Donetsk airport, and in Shyrokyne, just outside the Ukrainian port city of Mariupol on the Sea of Azov.

Many expect the conflict to escalate this summer. After visiting Ukraine on a fact-finding mission in March, former NATO Supreme Allied Commander Gen. Wesley Clark said an attack on Ukraine was imminent and would likely occur before May 9, the 70th anniversary of the defeat of Nazi Germany.

Ukrainian and U.S. military officials warn that a buildup of Russian soldiers on Ukraine’s eastern border and in Crimea; the increased flow of Russian weapons, equipment and military trainers into Ukraine; as well as the buildup of Russian air defenses inside Ukraine all suggest a major Russian-backed offensive is in the works.

“This is the highest amount of Russian air defense equipment in eastern Ukraine since August,” State Department spokeswoman Marie Harf said on Wednesday, according to the AP. “After maintaining a relatively steady presence along the border, Russia is sending additional units there.”

On Thursday, NATO Secretary General Jens Stoltenberg said that more than 1,000 pieces of Russian military equipment, including tanks, artillery and anti-aircraft weapons have been moved into Ukraine in the last month, creating “reason for great concern” that pro-Russian separatists may launch an offensive and effectively abandon the framework of the Feb. 12 cease-fire.

“We are not certain about the intentions, but we know about their capabilities,” Stoltenberg said about the separatist buildup. “And we have seen the separatists supported by the Russian doing big offensives before and of course they could do it again.” Ukrainian military spokesmen say more than 100 soldiers have been killed since the cease-fire went into effect in February, although soldiers in the field and other government officials admit the number is likely much higher.

Ukrainian forces fled the eastern Ukrainian town of Debaltseve under a separatist assault in the days immediately following the truce, resulting in a chaotic retreat that left the roads out of Debaltseve lined with dead soldiers and destroyed equipment, according to journalists who witnessed the battle and its aftermath.

Fighting has significantly cooled off since the Debaltseve assault, but the cease-fire is broken virtually every day, with both separatists and Ukrainian forces accusing the other side of violating the truce’s terms by using heavy weapons, which are prohibited to be within firing range of the front lines under the deal.

In Dnipropetrovsk, civilian volunteers and their military instructors take seriously the threat of the war escalating.

“It can get much worse,” Armen said. “The Russians and separatists are bringing a lot more stuff into Ukraine. But if the Russians come here, we will destroy them.”

“I’m here to protect my motherland and my family,” said 32-year-old writer and volunteer Valeria Voitsekhovsky, who fled from the conflict area to Dnipropetrovsk last year. “But I really, really want peace. I don’t want any more war.”