Are Liberals Finally Rallying to Save Liberty? 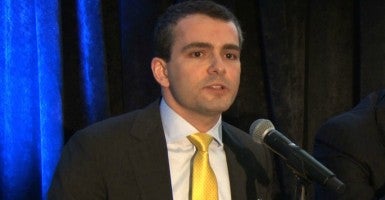 No part of our culture wars draws more heat than same-sex marriage. It is therefore noteworthy when vituperative tactics get so extreme that some members on one side of the debate call foul on their own comrades. Alas, that doesn’t happen in America very often anymore.

The incipient revolt against the tactics prescribed by Saul Alinsky (if that is what it is) is taking place regarding my colleague Ryan Anderson, The Heritage Foundation’s William E. Simon fellow and lead researcher on marriage.

>>> Ryan T. Anderson will be on ABC’s “This Week” this Sunday to discuss gay marriage and the Supreme Court. Tune in!

In a nutshell, Ryan’s view is that no matter what the Supreme Court may say this summer, marriage can only be the union of a man and a woman because, anthropologically, only the two sexes are complementary; biologically, only their union can reproduce offspring; and, socially, because children need a mother and a father.

For holding this view which humanity has had for millennia, and which our own president shared until he “evolved” a couple of years ago, Ryan is routinely pilloried with the most malicious commentary you can imagine. On any given day, his Twitter feed can turn into a running sludge; comments on his articles can make hardened stevedores blush.

Now, Ryan is as intellectual, ethical and civil a scholar as you’re ever likely to encounter. Indeed, what has caused a few pangs of remorse among some liberals is the contrast between Ryan’s constant courteousness and good cheer and the viciousness of those who want to drive him from the public square.

Not so fast, writers at “The Week” and “Salon” (yes, you read that right) have said this week. What prompted them to act was the reaction to an eye-poppingly fair piece about Ryan in The Washington Post.

The article dubbed him “a fresh voice on same-sex marriage,” and remarked on all he has accomplished in barely 33 years—the degree from Princeton and doctorate from Notre Dame, the book he wrote, the citation it received in Justice Samuel Alito’s dissent from United States v. Windsor, his prowess as a TV debater, etc.

It was unremarkable, therefore, that the school Ryan attended for 12 years, the Quaker Friends School of Baltimore, was justifiably proud of the article, and posted it on its Facebook page. That’s when the furies were awakened, and the comments on the school’s page began to pour in.

It wasn’t long before the head of the school, Matthew Micciche—who, let’s say, lacks Ryan’s fortitude—got a bad case of the vapors and deleted the article. He followed that up with a rambling apologia in which he expressed sorrow for “anguish and confusion” he had caused students.

Micciche’s mea culpa was too much for Damon Linker at “The Week” and Mary Elizabeth Williams at “Salon,” both of whom passionately disagree with Ryan but for whom Micciche’s abject shunning of an alum had become the last straw.

Linker wrote that the controversy was important,

Because of what it tells us about the cultural endgame of the gay-rights movement. The reaction of those who raised objections to the link as well as the decision of the head of school to remove the link and offer an abject apology for posting it—both of these are depressing signs that liberal public opinion is evolving in the direction of theological certainties and illiberal forms of intolerance. These so-called liberals want Anderson to be shunned. Expelled from the community. Excommunicated from civilized life. Ostracized from the ranks of the decent. That is something that should trouble all fair-minded Americans.

Linker went on to notice that we are constantly told that “treating Anderson and others on his side of the issue with civility is just as morally outrageous as seriously entertaining the arguments of an educated and polite champion of anti-miscegenation laws in the Jim Crow South. The gay rights movement and many liberals increasingly want this to become the default, accepted, commonsense view. They must not be allowed to succeed.” Liberal public opinion, Linker concluded, is evolving into “illiberal forms of intolerance.”

Williams, in an article titled “This is not how you win the marriage equality debate” said that, as a liberal, “it bums me out” to agree with Linker. If you truly support equality, she added:

You have to support the right of people whose ideas are different from yours to have those ideas and to express them. You can vote against them in elections, you can choose not to patronize their businesses, and you can certainly challenge their positions. But you can’t force them to side with you and you can’t be okay with reasonable debate and inquiry being shut down. You can’t be okay with people you don’t like getting threatening and ugly harassment—like the person who told Anderson on Twitter Wednesday he ‘should be strung up by your balls and horsewhipped for all the anti-LGBT hate you promote.’

As a conservative, I take my hat off to Linker and Williams, and hope to repay the favor someday. They are but two voices—though it is worth noting that New York Magazine and even the Washington Blade have reported fairly on this controversy. Perhaps not all comity is lost, and, like the Senate recently, we can all get back to regular order.