Rubio Takes on Export-Import Bank: ‘Government Should Not Be Picking Winners and Losers’ 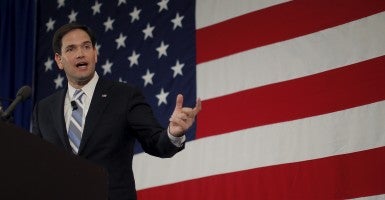 As hundreds of business owners, bankers and government officials descended on Washington, D.C., in support of the embattled Export-Import Bank, Republicans miles away mobilized to call for the agency’s end.

“The government should not be picking winners and losers when it comes to the free market,” Republican Sen. Marco Rubio of Florida told reporters today.

Rubio, a 2016 presidential candidate, outlined his opposition to Ex-Im in a conference call hosted by the conservative group Americans for Prosperity. On the call, the Florida senator denounced the bank as an engine of corporate welfare and cronyism.

“I have long supported ending funding for Ex-Im,” Rubio told reporters. “I don’t believe taxpayer money should be used as corporate welfare.”

“The government should not be picking winners and losers when it comes to the free market,” @MarcoRubio said today about #ExIm.

The presidential hopeful voted against the bank’s reauthorization in 2012.

Despite the benefits the bank may bring to his constituents, Rubio argued the government shouldn’t be creating an uneven playing field and taking taxpayer dollars to conduct business overseas.

“The bank should be allowed to expire, and what’s interesting about it is this is an issue where Congress doesn’t have to do anything but allow it to expire,” he said.

Additionally, while the bank often praises itself for returning money to the Department of the Treasury—operating at no cost to taxpayers—Rubio cited a report from the Congressional Budget Office that found Ex-Im will cost Americans approximately $2 billion in the next 10 years.

Rubio joins a handful of Republican presidential candidates who have called for Ex-Im’s end, and on Capitol Hill, conservatives such as Reps. Jim Jordan of Ohio and Jeb Hensarling of Texas are leading the charge against reauthorizing the bank.

However, a number of freshman Republican members have joined the fight against its reauthorization.

Reps. Ken Buck of Colorado, Alex Mooney of West Virginia and Dave Brat of Virginia each spoke in favor of ending Ex-Im on the House floor today.

“You are footing the bill for this free money that falls out of heaven out here working through special interests and corporate cronies,” Brat said today.

“The Export-Import Bank does not advance the public interest,” he continued. “Export-Import imposes real costs on you, the American consumer, taxpayer, and other businesses through risk, market distortion and other misallocations of resources.” Those attending the two-day conference heard discussions on how U.S. exporters can remain competitive with mechanisms like the controversial Export-Import Bank.

“When I heard that Ex-Im was in question, I thought, ‘Man, that’s impossible. Why would they do that?’” Joe Kaeser, president of Siemens AG, an Ex-Im beneficiary, said today. “I really have to say that it’s the most significant supporting methods in order to do business in the United States.”

Ex-Im’s charter is set to expire in less than 70 days, and the White House has been pushing Congress to reauthorize the bank. Ending the United States’ backing of exports, the Obama administration argues, gives foreign countries with their own export financing the upper hand in the global market.

“It’s ridiculous that we have a really important asset that we need—that 60 other countries in the world have,” Secretary of Commerce Penny Pritzker said today. “It’s a ticket often for many of the customers here to just get into a bidding process, let alone winning or financing. It’s extremely important that story gets told and that the story particularly is understood in every congressional district across the country.”

Ex-Im’s backers argue the bank helps small businesses compete in the global market, but the bank also benefits a handful of large corporations, including Boeing.

The airplane manufacturer ranks among Ex-Im’s largest clients, and 80 percent of the bank’s transactions benefit it, General Electric and Caterpillar. Because of Boeing’s involvement with the bank, critics have dubbed Ex-Im the “Bank of Boeing.”

“If Ex-Im goes away, you’d have the Wild West. You’d have certain countries whose governments do believe in subsidization very much distorting the marketplace,” Boeing CEO Jim McNerney said.

“If Ex-Im goes away, you’d have the Wild West,” Boeing’s McNerney told the audience today. “You’d have certain countries whose governments do believe in subsidization very much distorting the marketplace.”

McNerney’s appearance at the annual conference earned the ire of House Financial Services Committee Chairman Jeb Hensarling of Texas. Hensarling, whose committee has jurisdiction over Ex-Im, requested McNerney testify at a hearing on the bank, but he ultimately declined.

“It is both curious and disappointing that Boeing’s CEO can make the time to appear at what amounts to nothing more than a pep rally for Ex-Im’s reauthorization, but is unwilling to make the case in a public forum open to congressional opening,” Hensarling said.