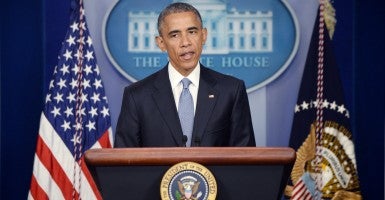 President Obama makes a statement about the two hostages killed by a U.S. drone strike targeted at an al-Qaeda compound. (Photo: Olivier Douliery/TNS/Newscom)

President Obama announced earlier today that U.S. aid contractor Warren Weinstein, who had been held hostage by al-Qaeda in Pakistan since August 2011, was accidentally killed in a U.S. drone strike in January.

The Obama administration must review its protocols with the drone program and consider changes that will prevent such tragic mistakes in the future.

Another hostage, Italian national Giovanni Lo Porto, and the deputy leader of al-Qaeda in the Indian Subcontinent Ahmed Farouq, were also killed in the same drone strike in Pakistan’s tribal areas bordering Afghanistan.

Obama took full responsibility for the mistake and expressed profound regret and his deepest apologies to the families of the killed hostages. He said U.S. intelligence operatives were unaware of the presence of any civilians at the al-Qaeda compound at the time of the strike.

The president said as soon as he learned of the inadvertent killings of the hostages, he decided to make the information public. As a democracy, Obama said, it was important that the U.S. openly confront its mistakes and learn from them.

The terrorist killed in the drone strike, Ahmed Farouq, was a leader in the branch of al-Qaeda that attempted to hijack a Pakistani naval vessel last September.

During the press conference, Obama also announced that U.S. citizen Adam Gadahn, who had been a spokesperson for al-Qaeda, appearing in several videos calling for attacks against the U.S., was killed in a separate drone operation in the same area also in January.

Elaborating on the two drone strikes that took place in January, White House Press Secretary Josh Earnest said that neither Farouq nor Gadahn were specifically targeted by U.S. intelligence and that their presence at the al-Qaeda compounds was also not known until after the strikes.

The inadvertent killings of Weinstein and Lo Porto will almost certainly lead to criticism of U.S. reliance on drone strikes to fight terrorism in the region.

The reality is the U.S. drone campaign in Pakistan’s tribal border areas has led to the degradation of al-Qaeda and its ability to plot, plan, and train for attacks, and the drone program should continue. Documents found at the site of the May 2011 raid against Osama bin Laden confirmed that drone strikes had taken a significant toll on the terrorist organization.

Drone operations remain an important tactic in battling terrorism, but they are not a substitute for a global counterterrorism strategy. The White House hoped to wash its hands of global terrorism and use the elimination of Osama bin Laden in 2011 as justification for deprioritizing counterterrorism operations.

But the threat of global terrorism has not gone away. It has merely evolved. Instead of being a centralized cadre of terrorists with tight command and control, al-Qaeda has metastasized into a loose network of groups operating throughout the Muslim world.

The Heritage Foundation described the evolving threat from al-Qaeda with a report it published in August 2011 titled “A Counterterrorism Strategy for the Next Wave.” This report called attention to the fact that al-Qaeda was spreading its deadly ideology and attacks through its affiliate organizations across the Muslim world as part of its strategy to conduct a global Islamist insurgency.

The U.S. continues to face a dangerous and complex global terror threat. The U.S. must adopt a strategy to match this threat.

In addition to drone strikes, the U.S. must employ diplomatic, financial, and military engagement with both Pakistan and Afghanistan, including maintaining a residual U.S. force presence on the ground in Afghanistan, as part of its counterterrorism strategy in South Asia.