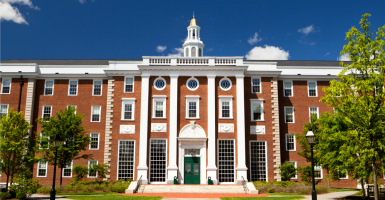 It’s usually a lot easier to tell someone else to solve a problem than to do it yourself.

A movement has sprung up on many college campuses urging schools to divest their endowment funds of any companies that produce fossil fuels.

The protesters argue we must dramatically reduce the amount of fossil fuels used each year in order to prevent climate change. In their view, schools have a moral imperative to purge their portfolios of companies that produce such fuels.

So far 22 U.S. colleges and universities have agreed to protesters’ divestment demands. Now the multi-million dollar organizations backing the “grassroots” movement have turned their attention to high profile targets such as Harvard University.

Student activists at Harvard are leading a series of protests to pressure the university into purging its $35.9 billion dollar endowment of investments that aren’t “green” enough.

A focus on divestment accomplishes only two things. First, to the extent it has any impact on stock price (dubious), it will make fossil-fuel investments a better deal for subsequent investors since divestment does not change the demand for nor profits of selling the fuels.

In essence, those pushing divestment want colleges and universities to play investment musical chairs where their schools volunteer to be the ones who don’t get a seat.

If students at Harvard and elsewhere are truly serious about reducing greenhouse gas emissions, then instead of advocating for the symbolic gesture of divestment, they might consider transferring to a school closer to home.

Climate activists have long urged us to buy locally grown food to reduce our carbon footprint. The same principle could apply to colleges.

If cutting carbon dioxide is so important that it justifies sacrificing choice and quality in food, why not for education as well? Perhaps it could be called the “Learn Local” movement.

Let’s use Harvard to illustrate the point. Eighty-three percent of Harvard undergraduates come from states outside of New England. Transfer by those students to a hometown college has the potential to substantially reduce greenhouse gas emissions.

Based on Harvard’s regional enrollment data, we estimate that undergraduate students living outside of New England burn through roughly 814,000 gallons of jet fuel flying back and forth from school each year.

By walking instead to a college in their hometown these out-of-state Harvard undergraduates could become “local-scholars” and save enough fuel to prevent about 17.2 million pounds of carbon dioxide emissions.

Of course, we don’t really think a “Learn Local” movement is a good idea and we don’t expect many Harvard students to transfer to a community college in order to reduce carbon dioxide emissions.

We do fully expect them to continue pointing their fingers and telling others what to do to save the planet. Perhaps these numbers illustrate that the divestment movement is more about shifting perceived blame than anything else.