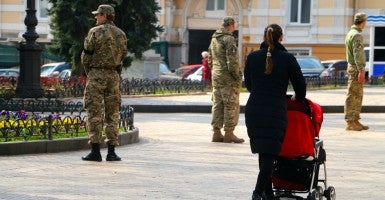 ODESSA, Ukraine—Outside of the city administration building here on April 16, three older men who said they were from the local Communist party unfurled a red hammer and sickle flag to protest a national law banning symbols of the Soviet Union.

Nearby, police and local militia units were standing in a defensive ring around city hall. Threats of a protest against upcoming city council votes had local law enforcement on edge, anticipating it could reignite the city’s simmering pro-Russian separatist movement. When the Soviet flag was unfurled, the police immediately responded. And after a few minutes of protest the three Communist party members relented peacefully and put the flag away.

“Hiding the flag doesn’t change the way we think,” one said, while carefully folding the flag. “We are still Communists.” They declined to give their names, but two claimed to be Red Army veterans.

There were a few scuffles between police and local agitators and at least one arrest, but no large-scale violence. By evening, the crowds and police had dispersed and the square outside city hall was once again filled with mothers pushing strollers and teenagers performing tricks on their BMX bikes. Life in this Black Sea port city and tourist destination, which is more than 380 miles from the front lines of the Ukraine conflict, appeared to be continuing on as normal. But many residents here worry that a pro-Russian uprising could erupt anytime, potentially spurring the approximately 2,500 Russian troops stationed in the nearby Moldovan breakaway region of Transnistria to invade.

“Only about 20 percent of Odessa is pro-Russian,” said a Right Sector soldier who went by the nom de guerre “Maverick,” standing guard in central Odessa last weekend. “But that’s enough to cause serious problems.”

Major combat in the Ukraine conflict has mostly been confined to cities and villages located in the “Donbas”— a pocket of territory on the Ukraine’s southeastern border with Russia where, despite the Feb. 12 cease-fire, fighting continues daily. But the year-old conflict has evolved, sparking a wave of terrorism and violence beyond the battlefields of the Donbas. The entire country is on edge, particularly in Kharkiv, Dnipropetrovsk and Odessa, (Ukraine’s second, fourth and third largest cities respectively), all of which held off separatist uprisings last year.

Some Ukrainian officials and media claim the wave of attacks is a Russian-backed operation to destabilize Ukraine’s post-revolutionary government.

“These three cities, especially Kharkiv and Odessa, are the most vulnerable,” said Oleksiy Melnyk, director of foreign relations and international security at the Razumkov Centre, a Ukrainian think tank.

“In almost every terrorist attack there is clear Russian involvement,” he added. “The main goal of Russian Federation is to show to the international community and to their own public that Ukraine is a failed state, that the government is illegitimate and that most Ukrainians support a fascist ideology.”

Military checkpoints ring the three cities, and military assets are stationed throughout smaller towns and empty farmland in between to guard transportation routes and key positions such as bridges and public utilities.

Local officials and residents across the region say the separatist threat has not been defeated, but has been lying dormant. And as weapons and soldiers seep out of the conflict areas, and the grinding yearlong war deepens the ideological fervor of the pro-Russian separatists (many of whom now have combat experience as well as Russian military training and weapons), the threat of repeat uprisings and terrorist attacks is on the rise.

“With Ukraine’s economy reeling, the value of the hrvynia plummeting, and general malaise among citizens, terrorism is a new potent tool in the arsenal of Kremlin-backed groups,” the Ukraine Crisis Media Center editorial board wrote Feb. 26. “Small, sporadic bombings throughout the country can achieve a sense of hopelessness and undermine faith in Ukraine’s elected officials and their ability to bring stability and security far from the frontlines.”

In Kharkiv (160 miles from the front lines), a new national law banning Nazi and Communist symbols, including statues of Soviet leaders such as Vladimir Lenin, has added to pre-existing tensions. A group calling itself the Kharkiv Partisans recently threatened to kill five Ukrainians for every Soviet monument taken down in the city. The city has been hit by a string of bombings this year, including one on Feb. 22 during a rally celebrating the one-year anniversary of Ukraine’s revolution. Three people were killed, including a 15-year-old boy.

The city’s physical proximity to the Russian border (about 20 miles) and the front lines has left it vulnerable to infiltration by pro-Russian separatists. But a separatist movement in the city crumpled last spring, and life in Kharkiv appears normal. Ukrainian flags fly from downtown flagpoles. The city center was shut down on April 11 for a running race. And on Orthodox Easter, families flocked to the city’s zoo to take advantage of free admission for the holiday.

But, as in Odessa, there is an undercurrent of anxiety in Kharkiv. Security officials have arrested more than 700 people accused of supporting separatists. And law enforcement and intelligence officials have stepped up counterterrorism operations in the run up to the May 9 Victory Day celebrations, commemorating the surrender of Nazi Germany.

The security crackdown has taken its toll, eroding local faith in both national and local government.

“People don’t trust this government or this president,” said a lawyer for the Kharkhiv district council, speaking on condition of anonymity due to security concerns. “Kharkiv is a very tactical, dangerous region in Ukraine, and people are afraid.”

In Dnipropetrovsk (218 miles southwest of Kharkiv, 200 miles west of the front lines), the recent departure of the city’s mayor, oligarch Ihor Kolomoisky, has residents on edge.

Kolomoisky is credited by many with preventing a separatist takeover last year.

“When things started happening in the east, they tried it here,” said Soslan Bekoev, 39, a lawyer in Dnipropetrovsk. “There were people in the streets waving Russian flags. But Kolomoisky blocked off the city, and the agitators couldn’t get in.”

Under pressure from Ukrainian President Petro Poroshenko, Kolomoisky stepped down from office on March 25 after he used his personal guards to take over the Kyiv offices of two companies in which he held interests as a protest against efforts by parliament to regulate his business affairs. Some residents claim his departure has left the city vulnerable to pro-Russian separatists, who might look to seize advantage of a power vacuum and divided loyalties in the local government.

“People are scared with Kolomoisky gone,” Bekoev said. “Many people think the new government won’t be able to keep us safe.”

In addition to keeping separatists out of Dnipropetrovsk, Kolomoisky also helped broker stability by implementing strict anti-corruption measures, which were an olive branch for those in the city advocating for drastic political change. With Kolomoisky gone, however, most of the anti-corruption campaigns have been put on hold.

“We are at a crossroads,” said Vitaliy Dorokhin, 39, a lawyer from Dnipropetrovsk and military veteran. “People are upset. After Kolomoisky left, they have no faith in the new government.”

In Odessa, residents worry about May 2—the upcoming first anniversary of a deadly failed takeover of the city last spring. On May 2, 2014, 48 people were killed during clashes between pro-Ukraine and pro-separatist camps, 32 of whom died when the Trade Union building within which separatists had hunkered down caught fire.

The city has suffered more bombings and separatist activity than any other outside the Donbas, with more than 10 in 2015. The SBU (Ukrainian equivalent of the FBI) recently launched the second phase of its crackdown on Odessa’s pro-Russian militant groups this month, making dozens of arrests and uncovering stockpiles of explosives such as TNT, as well as small arms. A popular tourism destination, the violence has affected the city’s economy, with tourism in 2014 only one tenth what it was the year before. Yet, looming beyond the threat of terrorism are the approximately 2,500 Russian troops stationed in the nearby Moldovan breakaway region of Transnistria, 60 miles away.

Residents worry that another separatist uprising would be an excuse for the Russian troops massed across the border to invade. Adding to those fears, on April 9 Russian forces in Transnistria held a military exercise comprising 400 troops, who trained with armored personnel carriers and fired about 100,000 rounds of ammunition.

Luke Coffey, Margaret Thatcher fellow at The Heritage Foundation and a U.S. Army veteran, said Russia’s presence in Transnistria and influence in the Moldovan region of Gagauzia pose a potential threat to Ukraine and the Odessa region.

“Bringing this region under Russian influence would almost complete Moscow’s control of Ukraine’s western border,” Coffey said. “It would also place Ukraine’s Odesa Oblast under further threat from Russian aggression. This fits in line with Putin’s imperial vision of the region and his designs on Ukraine.”

“After Russia’s illegal annexation of Crimea last year nothing can be ruled out,” he added.

Melnyk said Russian intervention from Transnistria was possible, but less likely than one year ago due to Ukraine’s improved military capabilities.

“For the time being, the cost would be high for the Kremlin to take any actions from Transnistria like they did in Crimea or in the East,” he said. “The risk is low, but it can’t be ruled out.”