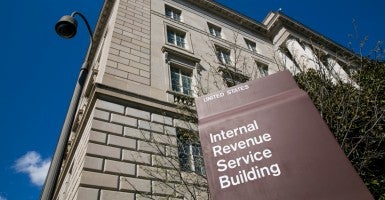 About 7.5 million Americans paid an average penalty of $200 for not having health insurance in 2014. (Photo: Kris Tripplaar/Sipa USA/Newscom)

On Wednesday, the House Ways and Means Committee released a report detailing wasteful spending at the Internal Revenue Service.

The Washington Post recently reported that IRS Commissioner John Koskinen called taxpayer service this season from his agency “abysmal,” and he blamed the poor service on budget cuts.

The House Ways and Means Committee, however, said that the agency had all the funds it needs to serve taxpayers—but the funds weren’t used appropriately.

In the majority staff report, titled “Doing Less With Less: The IRS’s Spending Decisions Harm Taxpayers,” the Republican authors argue that despite the IRS’s claim that “budget cuts” led to poor taxpayer service, the “IRS deliberately cut funding for customer service that was fully under its control.”

According to the report:

A close review of the agency’s spending shows the IRS deliberately cut $134 million in funding for customer service to pay for other activities. Spending decisions entirely under the IRS’s control led to 16 million fewer taxpayers receiving IRS assistance this filing season. Other spending choices, including prioritizing employee bonuses and union activity on the taxpayer’s dime, used up resources that otherwise could have been used to assist another 10 million taxpayers.

The authors of the report write that the findings “raise serious questions about the nature and extent of the agency’s self-described budget crisis and its commitment to serving the taxpayer.”

The report outlines what it calls the IRS’s “questionable decisions.” For example, they awarded $60 million in bonuses to employees, which could have funded 7.2 million calls.

If IRS funding had been used more judiciously, the report concludes, their resources could have funded over 25 million calls from taxpayers seeking assistance.

“These findings are deeply troubling,” Rep. Paul Ryan, R-Wis., the chairman of the House Ways and Means Committee, said in a statement. “At all times, but especially during tax season, the IRS should put the taxpayer first. But instead, the agency cut funding for the very customer service that taxpayers rely on. The IRS has a lot to answer for, and the Ways and Means Committee is going to hold it accountable.”

In prepared remarks for an Oversight Subcommittee hearing today, Rep. John Lewis, D-Ga., another member of the committee, said, “Unfortunately, during this filing season, taxpayers finally felt the pain of the Republicans’ $1.2 billion dollar cut to the agency’s budget.”