Why George W. Bush Let a Soldier’s Mom Yell at Him 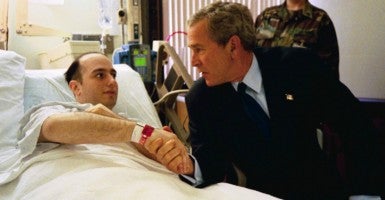 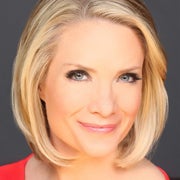 Dana Perino served for seven years in the administration of President George W. Bush and became the first Republican woman to be named as the White House press secretary. She is a Fox News contributor and one of the co-hosts of "The Five," and the author of "Let Me Tell You About Jasper."

News of America’s military men and women [who] were wounded and killed in Iraq and Afghanistan almost overwhelmed me on some days. I may have sounded strong when I was talking to the press, but sometimes I had to push my feelings way down in order to get any words out of my mouth to make statements and answer questions.

The hardest days were when President Bush went to visit the wounded or families of the fallen. If it was tough for me, you can only imagine what it was like for the families and for a president who knew that his decisions led his troops into battles where they fought valiantly but were severely injured or lost their lives. He regularly visited patients at Walter Reed military hospital near the White House. These stops were unannounced because of security concerns and hassles for the hospital staff that come with a full blown presidential visit.

One morning in 2005, Scott McClellan sent me in his place to visit the wounded warriors. It was my first time for that particular assignment, and I was nervous about how the visits would go.

The president was scheduled to see 25 patients at Walter Reed. Many of them had traumatic brain injuries and were in very serious, sometimes critical, condition. Despite getting the best treatment available in the world, we knew that some would not survive. We started in the intensive care unit. The chief of naval operations (CNO) briefed the president on our way into the hospital about the first patient we’d see. He was a young Marine who had been injured when his Humvee was hit by a roadside bomb. After his rescue, he was flown to Landstuhl U.S. Air Force Base in Kaiserslautern, Germany. At his bedside were his parents, wife, and five-year-old son.

“What’s his prognosis?” the president asked.

The military aide presented the Marine with the award for a second time. The president had tears dripping from his eyes onto the Marine’s face.

“Well, we don’t know sir, because he’s not opened his eyes since he arrived, so we haven’t been able to communicate with him. But no matter what, Mr. President, he has a long road ahead of him,” said the CNO.

We had to wear masks because of the risk of infection to the patient. I watched carefully to see how the family would react to President Bush, and I was worried that they might be mad at him and blame him for their loved one’s situation. But I was wrong.

The family was so excited the president had come. They gave him big hugs and thanked him over and over. Then they wanted to get a photo. So he gathered them all in front of Eric Draper, the White House photographer.

President Bush asked, “Is everybody smiling?” But they all had ICU masks on. A light chuckle ran through the room as everyone got the joke. The soldier was intubated. The president talked quietly with the family at the foot of the patient’s bed. I looked up at the ceiling so that I could hold back tears.

After he visited with them for a bit, the president turned to the military aide and said, “Okay, let’s do the presentation.” The wounded soldier was being awarded the Purple Heart, given to troops that suffer wounds in combat. The CNO held the medical team back and said, “Hold on, guys. I think he wants the president.”

The president said, ‘That mama sure was mad at me.’ Then he turned to look out the window of the helicopter. ‘And I don’t blame her a bit.’

Now everyone was crying, and for so many reasons: the sacrifice; the pain and suffering; the love of country; the belief in the mission; and the witnessing of a relationship between a soldier and his Commander in Chief that the rest of us could never fully grasp. (In writing this book, I contacted several military aides who helped me track down the name of the Marine. I hoped for news that he had survived. He did not. He died during surgery six days after the president’s visit. He is buried at Arlington Cemetery and is survived by his wife and their three children.)

And that was just the first patient we saw. For the rest of the visit to the hospital that day, almost every family had the same reaction of joy when they saw the president. But there were exceptions. One mom and dad of a dying soldier from the Caribbean were devastated, the mom beside herself with grief. She yelled at the president, wanting to know why it was her child and not his who lay in that hospital bed.

Her husband tried to calm her and I noticed the president wasn’t in a hurry to leave—he tried offering comfort but then just stood and took it, like he expected and needed to hear the anguish, to try to soak up some of her suffering if he could.

Later as we rode back on Marine One to the White House, no one spoke.

But as the helicopter took off, the president looked at me and said, “That mama sure was mad at me.” Then he turned to look out the window of the helicopter. “And I don’t blame her a bit.”

One tear slipped out the side of his eye and down his face. He didn’t wipe it away, and we flew back to the White House.

This is an excerpt from “And the Good News Is…: Lessons and Advice from the Bright Side” by Dana Perino. Reprinted by permission of Twelve Books (c) 2015.