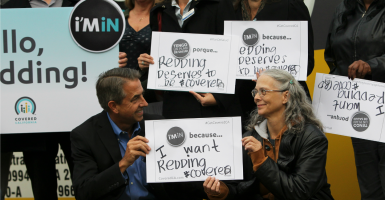 California’s health insurance exchange, established under the Affordable Care Act, has been held out as a national model for Obamacare. In some ways—not all of them good—it is. Whether it’s falling far short of 2015 enrollment goals or sending out 100,000 inaccurate tax forms, Covered California is struggling with its share of challenges.

Now, several senior-level officials integral to the launch of Covered California—who enthusiastically support the Affordable Care Act—are speaking about what they view as gross incompetence and mismanagement involving some of the $1 billion federal tax dollars poured into the state effort.

‘Somebody Must Have Been Smoking Something’

Consultant Aiden Hill became a “foxhole convert” to Obamacare in July of 2010 when he lost his insurance, had a serious medical issue and couldn’t get a new policy.

“I lived through a health care nightmare. That’s one reason why I took a cut in my pay rate to work for Covered California.”

In March 2013, Hill was hired as project manager over Covered California’s massive $120 million call center effort. In just six short months, it would face an avalanche of customers seeking insurance mandated under the new law.

But five months on the job converted Hill from avid supporter to disenchanted whistleblower. He says the secretive and dysfunctional culture was more interested in cheerleading than real results. After he persistently raised concerns, Covered California abruptly terminated his contract. He says the experience drove him to raise allegations about waste and cover ups at a Covered California board meeting. Covered California quietly launched an independent investigation into Hill’s grievances. Nine months later, the results were summarized in four sentences stating that evidence did “not support” Hill’s complaints. Hill calls the probe a sham and says the inquiry didn’t include interviews with many witnesses he suggested.

Today, Hill describes himself as disgusted by the process—and soured on Obamacare.

Other officials integral to Covered California’s efforts concur with Hill’s assessment. One of them headed the largest call center.

“They started this way too late for what they needed to do,” says the official who was hired in April 2013, five months before the website’s launch. He has since left that position and asked not to be named to protect his current job status. “This program had to touch 58 counties, 11 federal agencies, all medical carriers and all advocates. To have a system that would be integrated seamlessly—somebody must have been smoking something if they thought that was going to happen.”

It’s against that backdrop that Covered California finds itself now grappling with a big disappointment: low enrollment growth. California ranked near the bottom in overall growth, with a scant 1 percent increase over last year.

“It’s a tiny fraction of the growth they were expecting,” says an official who helped implement the Affordable Care Act and examined California’s numbers.

As recently as last fall, the official says, California hoped to increase enrollment by 500,000 this year. But only an additional 7,098 have “selected a plan” for 2015.

“Their total enrollment is a step in the right direction but nowhere near what anyone thought it would be for the largest state in the country.”

Covered California would not answer our questions about enrollment figures.

Covered California would not address our questions about lackluster retention and growth.

“New enrollment for 2015 coverage is strong and has brought in consumers who our marketing and outreach targeted,” said Covered California Executive Director Peter Lee, overlooking the fact that his organization’s retention of last year’s customers was among the lowest in the country.

Hoping for a bump, California followed the lead of the federal HealthCare.gov effort and repeatedly extended this year’s enrollment deadline. The Feb. 15 cutoff was pushed back to Feb. 20 and then Feb. 22. Now, it’s been extended to the end of this month. The devastating crash of Covered California’s website and call centers on Oct. 1, 2013 was “the canary in the coalmine, an early warning of deep dysfunction,” according to Hill.

Pre-launch testing had proven disastrous. As with the national HealthCare.gov website, “it was breaking at the first click of the button,” says the former call center manager who worked under Hill. “Behind the scenes, states were worried. I know we were worried.”

Covered California contractors projected 10,000 calls the first day. The call center manager says he knew they were way off. “I and my training manager, who had launched call centers before, projected 20,000. We had 21,000 on day one. Our contractors were wrong.”

The HealthCare.gov website was on a parallel trajectory. It, too, suffered under hasty development and failed performance tests days before launch—all while the Obama administration put on a positive public face. “Everybody knew it wasn’t going to function,” says a third Covered California official. “Calls start coming in and within the first hour, the entire system went down—phone and web.”

“The train was coming off the rails,” adds Hill. “The call center was going into meltdown.”

The meltdown lasted for months and fixes proved costly. Covered California would not provide a tally of expenses, but the agency ended up asking the federal government for an extra $155 million. That put the cost of Covered California at more than $1.06 billion federal tax dollars. Covered California’s disastrous debut triggered a house of cards. When the website crashed, consumers were directed to fill out paper applications; they were 33 pages long and took at least an hour to complete. What’s more, they couldn’t be coordinated with the electronic version because of a major design flaw. The forms didn’t match.

But Covered California counted duplicate applications as if they were enrollments, giving the impression that more people had successfully signed up. (The Obama administration did the same with national HealthCare.gov applications.)

“A lot of the information that came out of Covered California was misleading or outright lies,” Hill insists. A customer service agent at Covered California’s Concord call center waves a flag for technical assistance during the opening day of enrollment in Concord, Calif. on Oct. 1, 2013. (Photo: Stephen Lam/Newscom)

“There’s no way he didn’t know he wasn’t telling the truth,” says an official, who still works at the agency and asked not to be identified. “We were fully aware that those numbers were inflated. It was horrible … morale busting. Things were being said that were blatantly untrue.”

The Daily Signal asked for Lee’s side of the story, but Covered California declined to make him available.

Hill says misinformation was aided and abetted by an uninformed press. In the midst of Covered California’s fiasco, he was stunned to read a New York Times article claiming the Golden State was an Obamacare utopia: the crown jewel of the health care reform effort.

What would happen if we unveiled a program that looked like Obamacare, in a place that looked like America, but with competent project management that produced a working website? Well, your wish is granted. Ladies and gentlemen, I give you California. … The California authorities have been especially forthcoming with data tracking the progress of enrollment. And the numbers are increasingly encouraging.

That assessment was far from the reality, say the Covered California officials who spoke to The Daily Signal.

>>> This is the first of two parts in The Daily Signal’s series, “Uncovering Covered California.” In part two, insiders expose Covered California’s “culture of secrecy” and allegations that it promoted egregious waste of taxpayer dollars.