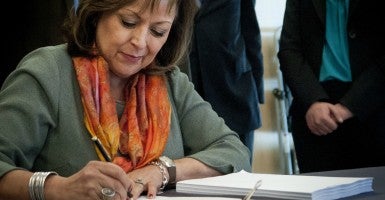 Last month, the New Mexico legislature unanimously passed a bipartisan bill essentially abolishing civil forfeiture in the Land of Enchantment (yes, that’s what they call themselves). But weeks went by and it looked like Gov. Susana Martinez was going to pocket veto the bill.  If she hadn’t signed the bill by noon Tuesday, it would have expired and forfeiture reform would have been dead until next year.

But she signed it on Friday, making New Mexico the latest state to reform its asset forfeiture laws. Kudos to Gov. Martinez!

Civil asset forfeiture is a law enforcement tool enabling authorities to seize property permanently if the property is allegedly related to a crime. However, at the state and federal level numerous examples of abuse have come to light in recent years, and various states (and the District of Columbia) have ramped up due process protections for property owners.

The new law in New Mexico is comprehensive, but here are some highlights:

As forfeiture reform continues to sweep the states and the federal government, New Mexico today stands as yet another example of bipartisan work getting things done. The next example might be Florida (join us for an event in Tallahassee next Monday!) or it might be your state.

This article has been revised in order to correctly state the date Gov. Martinez signed the bill.