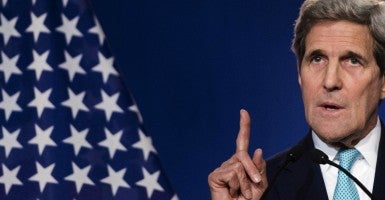 The alleged disaster would come from the carbon dioxide generated from the production and use of the 800,000 barrels of petroleum the pipeline would transport daily from Canada to our Gulf-Coast refineries.

Famous jet-setting environmentalist celebrities agree. So must Secretary of State John Kerry, who famously equated climate change to weapons of mass destruction (if you click on that link, be sure to catch Kerry’s ridiculously confused description of the science involved, “Try and picture a very thin layer of gases—a quarter-inch, half an inch, somewhere in that vicinity—that’s how thick it is. It’s in our atmosphere. It’s way up there at the edge of the atmosphere.”)

So many are so worked up about the climate change the Keystone Pipeline’s 800,000 barrels per day of petroleum might cause that the president has put the project under the green microscope delaying construction for at least five years.

Studies take time, and the more of them that show no problem the more you need to do. Or so it would seem.

If the impact of those 800,000 barrels (most of which would get to market even without the pipeline) are so problematic, how much more so would be the 800,000 barrels/day that are projected to get to the market from Iran if the international sanctions are lifted?

This is especially true given that, unlike the Keystone Pipeline oil, the Iranian barrels do not have alternative avenues to the market in the absence of lifting the sanctions.

Who knows, but the Obama administration and its environmentalist allies are all strangely quiet on the topic.