Is There a Real Wage Gap Between Men and Women? 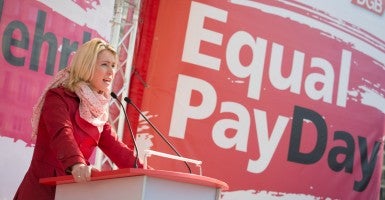 The National Committee on Pay Equity designated Tuesday, April 14 as Equal Pay Day to raise awareness for the gender wage gap. The committee and other groups, including the Obama administration, assert that the statistical gender wage gap is a result of discrimination and requires a federal government solution.

This leaves us with three questions to consider:

At 78 cents on the dollar, the so-called wage gap represents the earnings ratio between male and female full-time median wage workers based on the Census Bureau’s 2013 Current Population Survey. If you divide the median earnings for women by those of men, you arrive at the wage gap.

Calculating this earnings ratio based on weekly earnings shows a slightly smaller gap at 82 cents on the dollar. While this wage gap is real, it is the product of a number of factors.

Which Factors Explain the Wage Gap?

When accounting for relevant factors that affect pay, such as education, choice of industry and occupation, hours worked, experience and career interruptions, the difference between average male and female wages shrinks to about 5 to 7 cents on the dollar.

There is little, if any, evidence for widespread discrimination in wages and employment based on gender in the U.S.

In other words, the earnings ratio between women and men becomes 93 percent to 95 percent after accounting for relevant differentials between individuals.

But even this remaining gap is not necessarily an outcome of discrimination. If women disproportionately choose employers who will provide more of their compensation in the form of benefits than wages, this too would affect the overall wage gap.

In addition, there are limitations to currently available data to analyze factors such as work experience and job tenure in conjunction with factors like occupation and industry.

Should the Federal Government Do Something to Eliminate the Wage Gap?

There is little, if any, evidence for widespread discrimination in wages and employment based on gender in the U.S. In those rare cases where employers do discriminate based on gender, the Equal Pay Act of 1963 provides legal protections.

Beyond asking employers to prove that wage and employment differentials are due to “factors other than sex,” employers would need to show that they are a “business necessity” for which there is no alternative employment practice. It would be up to the courts to define what constitutes such a business necessity.

Moreover, the act would lift the cap on compensatory and punitive damages greatly increasing employers’ potential liability. My colleague James Sherk has called this “jackpot justice,” explaining that employers’ higher insurance costs to protect against greater legal liability would be paid for by reducing employee’s wages and hiring fewer workers.

Another risk is that the Paycheck Fairness Act would move the U.S. economy closer to a “comparative worth” pay structure enforced by the government. Reporting requirements and subsequent Labor Department pay guidelines would motivate employers to adopt more rigid pay structures, allowing for less flexible work arrangements and avoiding performance-based pay, such as bonuses that encourage and reward excellence to protect themselves against legal claims.

For more resources on the equal pay debate, see: