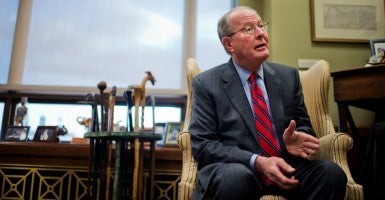 Sens. Lamar Alexander, R-Tenn., and Patty Murray, D-Wash., have released a draft of their No Child Left Behind rewrite, which is slated to be considered in the Senate Health, Education, Labor, and Pensions (HELP) Committee Tuesday.

The 601-page proposal has many of the hallmarks of the House No Child Left Behind rewrite—the Student Success Act—which failed to make it to the House floor last month.

In most ways, the House and Senate proposals are kissing cousins. They both eliminate the burdensome Adequate Yearly Progress (AYP) mandate on states, but retain the federal annual testing mandate; they each provide some program flexibility, but fail to actually eliminate the dozens upon dozens of ineffective and duplicative programs that have accrued over the decades, favoring consolidation of these programs over elimination and attendant spending cuts.

And notably, both fail to provide states the option to completely opt-out of the programs that fall under No Child Left Behind through the language contained within the Academic Partnerships Lead Us to Success Act (APLUS) approach.

The Senate No Child Let Behind rewrite fails to restore state and local control of education.

Both the House and Senate rewrites represent missed opportunities for conservatives in Congress to restore state and local control of education. The Alexander-Murray proposal contains additional policy shortcomings.

The Alexander-Murray proposal includes placeholder language with regard to funding levels, stating that “such sums as may be necessary” are authorized, effectively leaving it up to President Obama to determine the amount of money spent on authorized programs. That’s a strategy unlikely to produce any slowing of federal spending on or intervention in education.

The Alexander-Murray proposal creates mission creep, allowing states to use their Title I funds for pre-K costs, expanding federal intervention into the education of the youngest Americans.

Moreover, such language is a non-agreement agreement. One of the biggest sticking points in congressional reauthorization deliberations is always funding, and the Senate version has not found common ground on where funding levels should be set. So this “bipartisan” agreement sets aside one of the biggest issues that usually derails compromise proposals.

In lieu of the Adequate Yearly Progress mandate, which created federal sanctions for states that failed to have all students reach academic proficiency (which no states have accomplished), the Senate draft requires states to submit accountability plans that the U.S. Secretary of Education must approve. The proposal requires states to establish uniform state standards that are applied to all public schools:

‘(D) ALIGNMENT.—Each State shall demonstrate that the challenging State academic standards are aligned with—

‘(i) entrance requirements, without the need for academic remediation, for the system of public higher education in the State;

The proposal also requires states to put into place a system of uniform statewide assessments.

State assessments must be uniform, administered to all public school students, be aligned with state standards, be valid and of adequate technical quality, assess students annually in grades 3-8 and once in high school in reading and mathematics, and once in grades 3-5, grades 6-9, and grades 10-12 in science, and ‘‘involve multiple up-to-date measures of student academic achievement, including measures that assess higher-order thinking skills and understanding, which may include measures of student academic growth and may be partially delivered in the form of portfolios, projects, or extended performance tasks.”

States can choose to either administer multiple assessments throughout the year or use a single, end-of-year summative assessment. Although the proposal would allow states to create alternative assessment systems that are competency-based, those systems would have to be approved by the Secretary of Education, and the bill allows only five states at a time to pursue such an alternative.

It’s clear from the requirements outlined above that the federal government will retain significant say in defining what the U.S. Department of Education believes to be appropriate state assessment systems and testing schedules for schools.

The Alexander-Murray proposal also creates mission creep in the Elementary and Secondary Education Act (currently known as No Child Left Behind). It would allow states to use their Title I funds for pre-K costs, expanding federal intervention into the education of the youngest Americans.

Any reauthorization of the Elementary and Secondary Education should:

The goal of conservatives in both the House and Senate should be to restore state and local control of education. The Senate No Child Let Behind rewrite, like the House proposal, fails to achieve that goal.