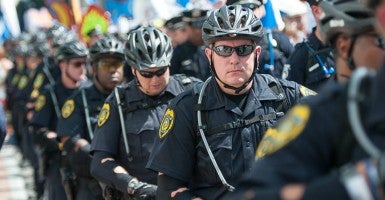 Americans were stunned last week by graphic video of North Charleston, S.C. Police Officer Michael T. Slager shooting an unarmed suspect in the back after a routine traffic stop.

The video led to Slager both being charged with murder and fired from the North Charleston Police Department.

Slager’s quick dismissal from the department stands in stark contrast to similar incidents in other cities which, unlike North Charleston, have unionized police departments.

Often police unions prevent officers from being dismissed without a lengthy arbitration process—even when they have flagrantly abused their power. An article in The Atlantic by Conor Friedersdorf recounts numerous cases where officers used excessive force and were reinstated after union arbitration.

In 2007, for example, Oakland Police Officer Hector Jimenez shot and killed an unarmed 20-year-old and was reinstated thanks to the police union’s protection. Seven months later, Jimenez shot another unarmed man in the back as he fled arrest. Shockingly, the arbitrators again ordered the police department to reinstate Jimenez, even though they had lost confidence in his ability to serve and protect.

Often police unions prevent officers from being dismissed without a lengthy arbitration process—even when they have flagrantly abused their power.

Such a last minute reinstatement seems unlikely for Slager, however, as the North Charleston Police Department (NCPD) is not unionized. In South Carolina collective bargaining is optional for cities and North Charleston has chosen not to do so.

Consequently the NCPD can fire any employee who is abusing his power without going through a lengthy union-designed arbitration process.

Elected officials should not have to bargain over whom to trust with deadly force. They—not government unions—answer to the public and should have the authority to take a dangerous cop off the streets.

Because municipal collective bargaining is optional in South Carolina, that is exactly what happened in North Charleston. Other states should take note.