How the Next President Can Stand Up to a Resurgent Russia 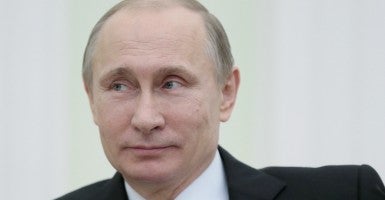 Usually, domestic issues are front-and-center in presidential campaigns. Not so this year. From Islamist terror in Europe, Africa, and the Middle East to the growing Iranian nuclear threat, foreign and national-security policy is the hot topic among White House aspirants.

That’s not a bad thing. The next leader of the free world must be able to powerfully project and defend America’s interests internationally. That must include standing up to a resurgent Russia.

“Leading from behind,” the mantra of the Obama administration, is simply not good enough when it comes to challenging Vladimir Putin’s regime. In the last year, Russia has grown more aggressive, annexing Crimea and fighting a proxy war in support of ethnic Russian separatists in Eastern Ukraine.

Clearly, the “Russian reset,” launched with great fanfare by then—Secretary of State Hillary Clinton in 2009, has been a spectacular failure. The Russian bear has caught the Obama presidency off guard, successfully exploiting what it perceives to be American weakness and indecision. Rather than projecting strength and resolve, the world’s superpower has looked like a deer in the headlights when faced with a relentlessly aggressive foe.

An expansion of America’s military presence in Europe is the best deterrent to Putin’s bullying.

Many of America’s partners in close proximity to Moscow fear, with good reason, that Putin’s ambitions stretch beyond Ukraine to the Baltic states of Latvia, Estonia, and Lithuania, each with a large Russian-speaking minority. If the next president of the United States is to rein in Russian ambitions, shore up its allies in Eastern and Central Europe, and bolster NATO, he or she must look beyond a sanctions-only approach. Sanctions alone have not forced any change in Putin’s behavior. The leader of the free world must have a clear strategy in place, one that projects American interests, strengthens the transatlantic alliance, and inhibits Russian aggression by imposing clear costs on Moscow.

The first component of a new Russia strategy must be the projection of military strength in Europe: establishing a permanent U.S. military presence in the Baltic region, expanding joint training exercises with military allies in Eastern Europe, and providing arms to help the Ukrainian government resist the Russian invasion. Alongside this approach should be a robust reiteration of America’s commitment to NATO’s Article 5.

An expansion of America’s military presence in Europe is the best deterrent to Putin’s bullying. It would put the Kremlin on notice that the United States will stand with its allies and defend its interests across the Atlantic. To be credible, these actions have to be backed up by greater investment in defense, and by a reversal of the damaging defense cuts of the Obama administration. The next president must also invest in modernizing America’s aging nuclear arsenal, including intercontinental-range ballistic missiles, heavy bombers, and submarine-launched ballistic missiles.

The second component should be economic, aimed firmly at breaking the dependency of so many European countries on Russian energy supplies. The next U.S. president must act to lift barriers to natural gas exports and end the ban on crude oil exports. At the same time, Washington should implement tougher sanctions against Russia’s violation of Ukraine’s sovereignty—including the imposition of visa bans and the freezing of financial assets. Economic sanctions should hit those at the heart of Putin’s regime who are enabling and bankrolling his imperial ambitions.

The third component is diplomatic and strategic: exerting pressure to isolate Putin on the international stage. One of the first orders of business of the next U.S. president should be to withdraw from New START. This fundamentally flawed treaty, signed by President Obama, benefits Russia by limiting America’s ability to deploy an effective global missile defense-system. The U.S. should also withdraw from the INF Treaty, an outdated arms-control agreement that Russia has repeatedly violated.

The fourth and final component of a new Russia strategy must aim to support political dissidents inside Russia. Just as Margaret Thatcher and Ronald Reagan stood with those who fought for freedom inside the former Soviet Union, America’s voice must be heard loud and clear in condemning the suppression of individual, economic, and political freedom in Russia today. A concerted effort must also be made to highlight and outflank Moscow’s vast international propaganda network.

It is time to end the illusion that Russia can be brought into the Western fold. That mirage was abruptly shattered when Russian tanks poured into Georgia in August 2008, leaving a dismembered nation in its wake. Moscow is once again a major strategic adversary of the United States on several key fronts—from the borders of the NATO alliance in Eastern Europe to the rogue states of Syria and Iran. Across the globe, Putin’s Russia is doing its best to undermine America’s interests, and in many cases has sided with unsavory anti-American regimes.

The last few years have seen the last remaining superpower in retreat against a backdrop of an increasingly dangerous world. “Leading from behind” has weakened American credibility, emboldened our enemies, and undermined our allies. We simply cannot afford to have more of the same in 2017. The next president of the United States must be prepared to lead and to stand up to those who threaten the security and interests of America and her allies.