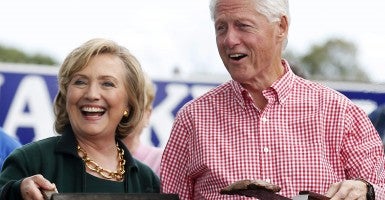 As Hillary Clinton launches her second bid for the White House, here are 15 facts about the former first lady, senator and secretary of state:

1. Young Hillary Rodham wasn’t initially interested in politics, she had dreamed of “becoming a baseball player, a journalist, and an astronaut,” according to the National Constitution Center.

2. According to Biography.com, Hillary Rodham was born on Oct. 26, 1947, in Chicago, Ill. to Hugh and Dorothy Rodham. She was raised in Park Ridge, Illinois along with her two younger brothers Hugh Jr. and Anthony.

Thinking of my dad today, and all of the others who served before and after him. #VeteransDay pic.twitter.com/PegPl68PEU

3. Hillary Clinton is a Methodist, unlike her husband Bill who is a Southern Baptist.

4. She married Bill Clinton in 1975, and gave birth to her daughter, Chelsea, in 1980. She welcomed her first granddaughter, Charlotte Clinton Mezvinsky, in 2014. Bill Clinton and wife Hillary Clinton attend the taping of the PBS series “In Performance at the White House” on the South Lawn of the White House in June of 1993. (Photo: Ron Sachs/CNP/AdMedia/Newscom)

5. She attended Wellesley College and Yale Law School, where she met her husband. After she completed her law degree, she also took postgraduate classes at Yale Child Study Center.

6. According to Biography.com, Clinton was once a Republican, even campaigning for Barry Goldwater in 1964. She switched parties in 1968, and went on to work for Democratic nominee George McGovern in 1972 and Jimmy Carter in 1976. 7. In 1974, Clinton became a member of the presidential impeachment inquiry staff during the Watergate scandal. President Richard Nixon resigned later that year.

9. In addition to serving as first lady, Clinton has had several other “firsts.” According to Biography.com, Clinton is the first presidential spouse to earn a postgraduate degree and the first to be elected to national office. Clinton hosts a press event to preview the holiday decorations at the White House in December of 1995. (Photo: Ron Sachs/CNP/AdMedia/Newscom)

10. She is also, according to author Sally Bedell Smith, the first presidential spouse to be subpoenaed. Bill and Hillary Clinton are the first and only first couple to be fingerprinted by the FBI.

12. Clinton has taught at the University of Arkansas Law School.

13. She served as a lawyer on the boards of Wal-Mart and TCBY.

The Clintons attend a press event to preview the holiday decorations at the White House in December of 1993. (Photo: Ron Sachs/CNP/AdMedia/Newscom)

15. Hillary won a Grammy in 1997 for Best Spoken Word Album for the audio version of her book “It Takes a Village.” .@BillClinton and I are over the moon to be grandparents! One of the happiest moments of our life. pic.twitter.com/Cww4r8C9Zt