Q&A With Washington Florist on Religious Freedom: ‘Who Are the Real Bigots Here?’ 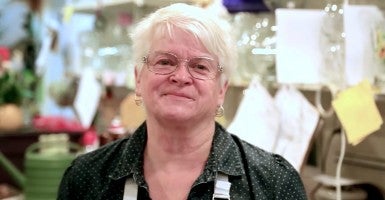 Barronelle Stutzman, a Christian florist from Washington state, is all too familiar with the public backlash that the owners of Memories Pizza faced after supporting Indiana’s controversial religious freedom law.

“I think it is sad that it has come to this,” Stutzman told The Daily Signal via email in an exclusive interview. “We all have differences, and every day we disagree with one another on some subject or another. But being able to still live peacefully with each other, despite those differences, is what true tolerance is all about.”

After being found guilty of violating Washington’s anti-discrimination law for declining to make flower arrangements for a gay couple’s wedding, Stutzman says that to this day, she still receives “threatening phone calls” from people who “want to destroy” her business and livelihood.

Now an onlooker to the national debate surrounding Indiana’s adoption of a Religious Freedom Restoration Act, which critics say enables business owners like Stutzman to decline gay and lesbian customers services, the 70-year-old florist is speaking out.

Ultimately, she asks, “Who are the real bigots here?”

Read on for the full interview.

What’s your reaction to the controversy surrounding Indiana’s adoption of a law designed to protect religious freedom in the state?

I think it is sad that it has come to this. I am not an expert on the law, but my understanding is that this is a law that protects your religious freedom, not a law that says you can discriminate.

People have made this into something it’s not, and have taken it way out of context. It is not a law that says you can decline goods and services to those who identify as gay. In my case, I have employed and served all kinds of people in my shop, whether they are gay, straight, lesbian or bisexual.

My faith teaches me that marriage is between one man and one woman. Marriage is a sacred covenant between a man and a woman, as Christ is to the church. To create and design something from my heart that helps celebrate their marriage would be dishonoring to God, and my convictions.

We all have differences, and every day we disagree with one another on some subject or another. But being able to still live peacefully with each other, despite those differences, is what true tolerance is all about.

When Rob Ingersoll left my shop, we were still friends. It wasn’t until the attorney general sued me that the name-calling began. If Rob were to walk into the store today, I would hug him, and catch up on his life. I miss the relationship we had.

Given what you’ve been through, what would you tell the owners of Memories Pizza in Indiana who received threats after telling reporters they would not cater a same-sex wedding?

I feel very badly and sad for them, that they have to go through this. This was not just a hypothetical question, it was an ambush. When you start getting threats on your life, threats to destroy your business, because you have a religious conviction about marriage, then something is terribly wrong with our perspective on individual freedom.

Our First Amendment protects our freedom to live and work according to our faith, without the fear of punishment from the government for doing so. What’s happening now should terrify us all! That being said, I would encourage and pray that the owners of Memories Pizza stay strong in their beliefs and don’t succumb to the bullying that’s being unleashed against them.

Washington florist to #MemoriesPizza: “Don’t succumb to the bullying.”

>>> Q&A on Indiana: Would Restaurants Be Allow to Turn Down LGBT Customers?

Our country was founded on the freedom to live and work according to our faith and beliefs without fear of the government punishing us for doing so—this is not something new; it’s the very reason we exist at all. The attacks on Christians who are living according to their faith’s teaching on marriage is alarming, and it is creating a twisted mob mentality that obscures what’s really going on.

What is your response to those who say you are “bigoted” and “intolerant” of gays and lesbians?

In the cases that have been bought up—the baker, photographer, t-shirt maker, the fire chief, and me, the florist—we have all had hateful threats, phone calls, and emails directed towards us.

Even after the judge ruled against me in court, we still got threatening phone calls. It became apparent to me that they want to totally destroy us and our religious beliefs—eliminate us, so that they can pretend these beliefs never existed, despite the fact that they have existed across centuries, races and cultures. Who are the real bigots here?

“Who are the real bigots here?” asked Barronelle Stutzman.

Do you think Americans will ever find common ground in this debate?

Every day that we live, we have difference of opinions with each other—that’s a natural, normal part of life. Up until now, we have been so very blessed to live in a county where we have the choice to believe as we choose and respect each other’s beliefs and have a Constitution that protects our right to do so. Or, do we anymore? It is me this time, but it will be you next.