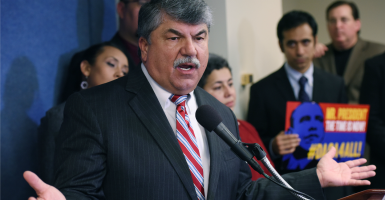 As the congressional trade agenda ramps up, labor leaders and anti-trade groups are out bashing free trade and circulating misconceptions about globalization. At a recent event at the Peterson Institute for International Economics, AFL-CIO President Richard Trumka led the charge, floating these five particularly egregious misconceptions about open markets.

>>> In Depth: What Big Labor Gets Wrong on Trade

Reality: Wages have steadily risen since 1960. Current account deficits and the net international debt position are poor indicators of the effectiveness of U.S. trade policy. The historical record shows clearly that trade deficits are a sign of good times for the U.S. economy. The deficit rose during the last economic expansion and shrank during the “Great Recession.” Meanwhile, real wages have expanded steadily before and after the major trade liberalization of the 1990s.

Misconception 2: Trade deals are actually investment deals, which allow companies to move capital offshore and ship goods back to the U.S.

Reality: Trade deals are both investment and trade deals. A large open economy such as the United States simply cannot have both a trade deficit and a capital account deficit. The reality is trade deficits are offset by inward investment, a positive thing for the U.S. economy.

Reality: Information remains sparse, but data collected by the International Labor Organization indicate this is largely not true. In countries where data is available, real wages have grown faster after free trade agreements were signed with the U.S. With the exception of Nicaragua, all countries that have free trade agreements with the U.S. have seen wage growth in recent years.

Reality: Real wages in Colombia expanded by 2.6 percent between 2012 and 2013, and labor violence and inequality have been falling. In fact, homicides per 100,000 residents have declined to their lowest level in two decades amid a sharp increase in market openness.

Misconception 5: NAFTA, permanent normal trade relations with China and the Korean Free Trade Agreement have helped companies to move their supply chains overseas to the disadvantage of Americans.

Reality: The globalization of supply chains has greatly increased manufacturing productivity around the world, benefiting Americans as well as foreigners. All aspects of the trade process create job opportunities for Americans; exports create jobs; foreign investment in the U.S. creates jobs; even imports create jobs. In fact, imports from China in toys and apparel alone support more than a half-million jobs in the U.S.

Unfortunately for Trumka, there is virtually no controversy about the benefits of trade freedom in the economics profession. Empirically, the benefits are clear and have proven themselves repeatedly over time. Instead of blocking free trade, labor leaders should be helping their members adjust to a growing and dynamic global economy. Failure to do so will only push them further to the periphery of the modern economy.