Start From Scratch on Taxes? Why There’s a Bipartisan Push to Sunset the Tax Code 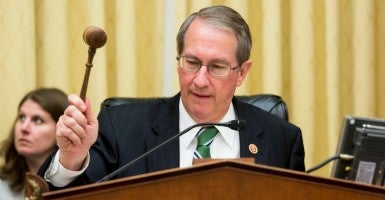 Few people in either party in Washington are happy with the current tax code, so what if we simply started over?

That is at the root of a proposal to sunset the current tax code on Dec. 31, 2019. Rep. Bob Goodlatte, R-Va., has introduced the Tax Code Termination Act (HR 27), which would do exactly that.

“Even though tax reform has been discussed for many years, we have yet to see any major actions to simplify the tax code,” Goodlatte said in a press release.

“We must force Congress to tackle tax reform head on. The best way forward is to scrap the current tax code and start fresh. This legislation would allow us, as a nation, to collectively decide what the new tax system should look like. There are many competing alternatives, but having a set date to end the current tax code will force the issue and the debate to the top of the national agenda.”

Colin Hanna, president of Let Freedom Ring, a conservative organization that supports the proposal, said the sunset date was chosen so the question of whether to scrap the system and start over could be part of the 2016 presidential campaign but the debate over what comes next would not occur until after the election.

This way, he said, those on the right who want a simpler, flatter code and those on the left who want to make it more progressive both could find a way to support Goodlatte’s legislation, which has 78 co-sponsors.

“We are very carefully not pushing any particular replacement plan,” Hanna told The Daily Signal. “Our goal is to achieve unity from all proponents of fundamental tax reform.”

Hanna said if Democrats come to see they have a good chance to retake the Senate in 2016 they may welcome an opportunity to rewrite the code from scratch. “Some progressives might well see sun-setting the current code as the best first step on the way to greater progressivity in the tax code,” he said. “If they come to that conclusion, I would welcome it as serendipity.”

In the meantime, he has reached out to the two declared Republican presidential contenders—Sens. Rand Paul of Kentucky and Ted Cruz of Texas, who both favor replacing the current tax system with a simpler tax code. He intends to reach out to candidates in both major parties.

“I see real opportunity to impact the presidential race and to start a national conversation, and I think we set the right date,” Hanna said. “If we push it too far out, it doesn’t create a sense of urgency, but if we were to set it too soon then it might create uncertainty and instability in the financial markets.”

But Curtis Dubay, a tax and economic policy analyst with The Heritage Foundation, was less certain of the strategy. Although he “sees no harm,” in getting members of Congress on record who support reform, he would prefer to see elected officials follow through with an alternative to the current tax code.

“If they are going to go through the energy of sunsetting the tax code, why not reform the tax code?” he said. “There will be two congresses between now and 2019, so what happens in the current Congress is not binding on the next. That’s the problem.”

But Hanna insisted “starting over from scratch” is the way to go.

“This is the kind of proposal that can prompt some introspective thought on the part of those who are serious about reform,” Hanna said. “Those who have particular target dates in mind for more incremental reforms, and those who favor a flat tax or other alternative, will conclude that starting from a blank slate is a whole lot easier than beginning with a 4 million-word tax code that’s longer than the Bible. First, sunset the current system. Then, the rest can follow.”