How Our High Corporate Tax Rate Hurts Our Economy 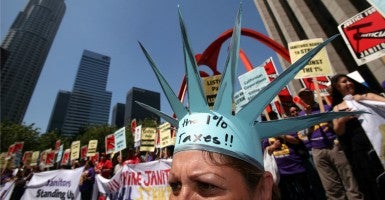 Alex Rendon is a member of the Young Leaders Program at The Heritage Foundation. The U.S. corporate tax rate is the highest in the developed world—by a long shot.

At 39.1 percent (35 percent federal rate plus the average of state rates), it remains substantially higher than the Organization for Economic Co-operation and Development average of 25 percent.

Combined with the “worldwide” tax system employed by the U.S. (where companies’ overseas income is taxed when they return it to this country) the excessively high corporate tax rate poses serious problems for the American economy.

The high rate makes America an uncompetitive environment for investment by both U.S. and foreign businesses. It makes fewer investments profitable to undertake in the U.S., meaning that businesses make fewer of them. Less investment causes lower job creation and slower wage growth.

The high rate also encourages U.S. businesses to escape the rate altogether. They can do that by inverting, as many did late last year. Inversions occur when a U.S. business merges with a foreign company and the new business moves its headquarters abroad. U.S. businesses can also sell themselves outright to foreign businesses.

Either method enables the company to avoid the U.S. worldwide tax system and its corporate rate. Any income they earn abroad will not be taxed again at the higher rate. This affects a company’s bottom line in the short-term and the long-term, and will continue to be an attractive option as long as the corporate tax rate remains as high as it is now.