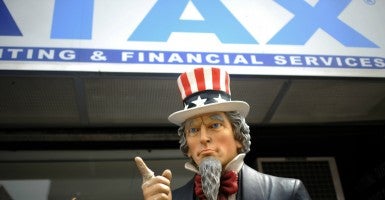 At almost the same time last week that the outgoing U.S. Attorney for the District of Columbia, Ronald Machen, gave Lois Lerner a get-out-of-jail free card over her contempt of Congress citation, the Justice Department and the Internal Revenue Service suffered a huge procedural loss in a court fight in Ohio.

In litigation filed in 2013 by conservative organizations targeted by Lerner and her colleagues at the IRS, a federal judge granted a motion to compel and ordered the IRS to produce the names of the 298 targeted organizations identified by the IRS for the Treasury Inspector General.

In 2013, NorCal Tea Party Patriots, the Faith and Freedom Coalition of Ohio, the Texas Public Policy Foundation and a number of other conservative organizations (ten in all), sued the IRS, the Treasury Department, Lois Lerner and other individual IRS employees.

They described themselves as organizations “comprised of individual citizens who have joined together to exercise their rights to freedom of speech and expression” and who “dissent from the policies or ideology of the” current administration. They claimed that, on the basis of their beliefs, they had been subjected “to delays and intrusive scrutiny during the tax-exempt status application process.” According to the ten plaintiffs, this violated the Privacy Act, the First and Fifth Amendments, and 26 U.S.C. §6103, a federal statute that protects the confidentiality of tax return information.

A federal judge ordered the IRS to produce the names of the 298 targeted organizations identified by the IRS for the Treasury Inspector General.

A similar lawsuit filed by True the Vote in federal court in the District of Columbia was unfortunately dismissed in October 2014 by a federal judge who said the case was “moot” after the IRS finally granted True the Vote’s tax exempt status in the middle of the litigation.

However, the Justice Department’s similar motion to dismiss the Ohio lawsuit failed last year. In a July 17, 2014 order, Federal District Court Judge Susan Dlott dismissed the claim under the Privacy Act and all of the claims against individual IRS employees, but she refused to dismiss the constitutional and Section 6103 claims against the IRS and the Treasury Department. Since then, the plaintiffs have been trying through the discovery process to identify all of the conservative organizations unfairly targeted by the IRS so that they can seek class certification. If they can convince Judge Dlott to certify a class, then the lawsuit would expand from the ten original plaintiffs to all of the organizations on Lois Lerner’s hit list. This would greatly expand the risks to, and potential liability of, the government.

But the IRS, in a fitting bit of irony, refused to turn over the names of the organizations whose applications were mishandled, claiming that would violate the confidentiality requirements of Section 6103.

On April 1, in what must have seemed a cruel April Fool’s joke to the Justice Department lawyers handling the case, Judge Dlott denied a protective order sought by Justice Department to prevent the IRS from being forced to turn over this information. She pointed out that Section 6103 has an exemption for tax information “directly related to an issue in” a judicial proceeding. Since the identity of all of the targeted organizations “is directly related to the issue of class certification in this federal court proceeding,” she granted the plaintiffs’ motion to compel. Specifically, she ordered to IRS to produce:

Dlott also ordered the IRS to either admit or deny the authenticity of an IRS document obtained by USA Today and publicized in a story on Sept. 18, 2013 that listed 162 groups that were flagged because of their “anti-Obama rhetoric, inflammatory language, and emotional statements.”

The arguments in this case by the Justice Department are another example of how the IRS has been hiding behind Section 6103. That law was intended to prevent the IRS from publicly disclosing private tax information—such as its illegal disclosure of the tax returns of the National Organization for Marriage (the IRS agreed to pay National Organization for Marriage  $50,000 to settle that case in June of 2014). But the IRS has been trying to use this law to prevent having to disclose its abusive treatment of taxpayers.

Fortunately, Judge Dlott did not buy the claims being pushed by Justice Department lawyers. The plaintiffs still have a long way to go in their attempt to finally hold someone at the IRS accountable. But they won a major round last year when they survived the Justice Department’s attempt to get the entire case dismissed.

And they just won a very important second round that will allow them to finally discover the identity of all of the organizations that the IRS pursued, in its attempt to suppress speech critical of Obama administration policies.