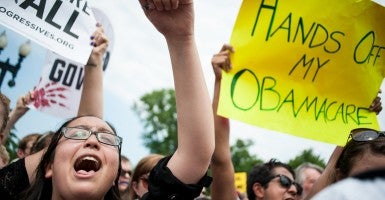 Alex Rendon is a member of the Young Leaders Program at The Heritage Foundation.

April 15 is right around the corner, and millions of Americans will find themselves paying more in taxes than ever thanks to Obamacare.

The law is more than a fundamental change to the country’s health care system. It also is a massive tax hike. As The Heritage Foundation’s Federal Budget in Pictures shows, according to the most recent scores, Obamacare will increase taxes by nearly $800 billion for the period of 2013-2022. Obamacare contains 18 separate tax increases. A few of the biggest include a tax on “Cadillac” health insurance plans, which doesn’t take effect until 2018, long after President Obama and many in Congress who voted for the tax in 2010 have departed Washington. Also, there is a tax on health insurance premiums and a higher rate on the Hospital Insurance payroll tax for single filers with incomes above $200,000 ($250,000 for married filers) that also applies to investment income.

At a time when the already-onerous tax code has created a significant drag on the economy, Obamacare’s tax hikes only do more damage. Many Americans have found themselves afflicted by higher health insurance premiums, driven up, in part, by new taxes on insurers. Increased rates on capital gains and dividends from the wage and investment tax hike discourage saving and investment, resulting in fewer jobs created and lower wage growth.

Because of Obamacare, Americans are paying much higher taxes and those taxes are hurting the economy. Though some bipartisan efforts exist to repeal some of the new taxes that benefit special-interest groups, including the medical device tax, an incomplete approach won’t be sufficient to overcome the detrimental effects of this law.

Congress should repeal Obamacare and all of its tax increases.

To learn more about federal spending, the national debt, and taxes, visit the 2015 Federal Budget in Pictures.