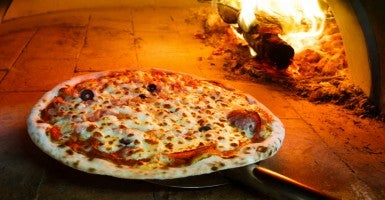 A fundraising effort for the family-owned pizza restaurant at the center of a national controversy over Indiana’s Religious Freedom Restoration Act raised over 250,000 dollars in less than 24 hours.

After telling a local media outlet their views on the state’s religious freedom law—which has since been amended to remove divisive parts—the O’Connor family of Walkerton, Ind. received a barrage of threatening phone calls, Tweets and negative reviews on their Yelp page.

Fearful of the threats, the O’Connors closed their restaurant, Memories Pizza.

“If a gay couple came in and wanted us to provide pizzas for their wedding, we would have to say no,” Crystal O’Connor told Indiana’s WBND.

O’Connor also said that they would “never” deny service to a gay customer who wanted to eat in the restaurant, but would decline to cater a same-sex marriage.

“We’re not discriminating against anyone, that’s just our belief and anyone has the right to believe in anything,” she said. “I do not think it’s targeting gays. I don’t think it’s discrimination. It’s supposed to help people that have a religious belief.”

TheBlaze’s Dana Loesch and her staff set up a GoFundMe account for the O’Connor family after Crystal O’Connor was a guest on her show.

O’Connor told Loesch that the future of Memories Pizza was uncertain, and, if the restaurant closed, she would no longer have a source of income.

“I don’t know if we will reopen, or if we can,” O’Connor told Loesch.

Over 9,000 individual donors contributed in the first 24 hours of the fundraising effort.

“Stay strong in your faith. Good Friday is nearly here,” one donor commented.

“We’ve got your back,” another wrote.

“If I lived closer, I’d stop by for a pizza today,” a third donor said.

One donor even apologized to the family:

“As a member of the gay community, I would like to apologize for the mean spirited attacks on you and your business. I know many gay individuals who fully support your right to stand up for your beliefs and to run your business according to those beliefs. We are outraged at the level of hate and intolerance that has been directed at you and I sincerely hope you are able to rebuild.”