Q&A on Indiana: Would Restaurants Be Allowed to Turn Away LGBT Customers? 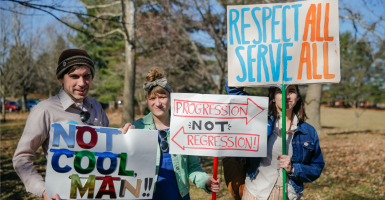 Does the Indiana Religious Freedom Restoration Act allow business owners to put their beliefs above the rights of their employees or customers?

No, the Indiana Religious Freedom Restoration Act protects the rights of all citizens. This law treats all American citizens equally. It ensures that people of all faiths have the right to live out their beliefs at home, in worship and at work, without unnecessary government coercion. The Indiana Religious Freedom Restoration Act simply says that if the government is going to substantially burden religious exercise it must prove it is doing so for a compelling governmental interest and in the least restrictive way possible.

Indiana’s religious freedom law protects citizens from government coercion—it places the burden of proof on the government if it is going to violate liberty. For over 20 years, the federal government has lived by this standard—the Religious Freedom Restoration Act of 1993 passed unanimously in the House, with 97 votes in the Senate, and was signed into law by Bill Clinton. Today, there are a total of 30 states that live under that same standard through statute or court precedent.

Does this law give businesses a “license to discriminate”?

No. In the more than 20 years that Religious Freedom Restoration Acts have been on the books, we haven’t seen the kind of absurd hypotheticals that opponents are just now conjuring up.

In reality, Religious Freedom Restoration Acts protect religious freedom for all Americans, in cases that have nothing to do with current political debates. For example, Religious Freedom Restoration Acts have provided protection for Sikhs, Muslims, Jews, Native Americans, among many others. They have protected the freedom of a Sikh woman to carry religious articles of her faith at work, allowed a Native American boy to wear long hair at school, and ensured a Christian ministry could continue serving recently released prisoners.

A number of courts, as well as the Obama administration, have argued that those protections at the federal level can apply in cases between two private individuals. As constitutional law professor, Josh Blackman, explains “four Courts of Appeals, covering nearly half the states in the Union, and the Obama Justice Department, have stated that RFRA [Religious Freedom Restoration Act] can be asserted as a defense in a private case seeking the enforcement of federal law.”

No, and no one is interested in refusing to serve gays and lesbians simply because of their sexual orientation. And no one has ever successfully used Religious Freedom Restoration Act to defend such actions. As law professor and religious liberty expert Douglas Laycock—a same-sex marriage supporter—notes:

Religious liberty concerns typically stem from those involved in the wedding industry being penalized by the government because they declined to participate in a same-sex wedding ceremony.

Religious liberty isn’t an absolute right. Religious liberty doesn’t always trump other values or rights. Religious liberty is balanced with concerns for a compelling state interest that’s being pursued in the least-restrictive means possible. The Indiana Religious Freedom Restoration Act, like all similar laws, doesn’t determine the outcome of a particular case. It simply provides a way for citizens to go into court to have their individual case reviewed by a court.

It depends. All the Religious Freedom Restoration Act does is say that Muslims get the same religious liberty protections as all other Americans and deserve their day in court. All Americans, regardless of their faith background, should be free to run their businesses, charities or houses of worship in accordance with their religious beliefs. There may be times when those religious beliefs conflict with a compelling government interest—ensuring public safety, for instance, which has been used as an argument against the hijab. Such a case would have to go to court and the evidence be weighed either way. Americans’ freedom is best protected when the state must show it has a compelling interest, pursued in the least restrictive way possible, before coercing or penalizing religious believers.

The way we’ve learned to live in a pluralistic society, with diverse religious and moral opinions, is to have a balancing test like the one the Religious Freedom Restoration Act provides.