Iranian Nuclear Talks Miss Another Deadline. What’s Next for the Talks With the Obama Administration. 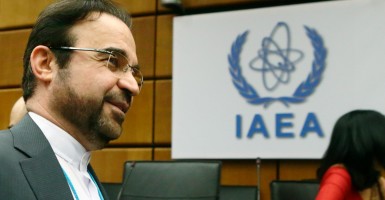 The nuclear talks with Iran have missed another self-imposed deadline, for the third time in 18 months. The deadline to reach a framework agreement that would outline the final deal was 6 p.m. EST, or midnight in Lausanne, Switzerland, where the talks are being held.

U.S. government officials earlier noted that the deadline was unlikely to be met, but White House Press Secretary Josh Earnest said that the talks would continue another day “as long as the conversations continue to be productive.”

Diplomats said that this round of talks has been dominated by three issues: How quickly U.N. sanctions would be lifted, whether those sanctions would automatically be reinstated if Iran violates the deal and how freely Iran will be able to advance its nuclear technology in the last five years of the proposed 15-year agreement.

Now the administration is downgrading the importance of the March 30 deadline for a framework agreement and is settling for some sort of statement of an “understanding.” This essentially would be a punt to keep the talks going until the “final” June 30 deadline.

The emerging details of the proposed agreement indicate that the Obama administration has abandoned efforts to permanently halt Iran’s nuclear weapons program, but will settle for a cosmetic solution that will only slow the pace of Iran’s nuclear march temporarily.

The administration has accepted Iran’s self-proclaimed “right” to enrich uranium despite six U.N. Security Council Resolutions that called for a halt in its enrichment efforts.

Increasingly alarmed U.S. allies have concluded that the Obama administration’s desperate push for a questionable agreement with Iran has become the biggest threat in the region.

Iran is not required to dismantle its nuclear infrastructure. Particularly worrisome are the continued operations of its illicit uranium enrichment facilities at Fordow and Natanz, as well as the heavy water reactor at Arak that has been described as a plutonium bomb factory. All of these facilities, which were built covertly by Iran in violation of its Nuclear Nonproliferation Treaty commitments, would now be legitimized by the agreement.

The International Atomic Energy Agency will be responsible for verifying Iranian compliance, despite the fact that Iran has consistently stonewalled the agency’s efforts to investigate possible military dimensions of its nuclear program, as it repeatedly promised it would, including in the 2013 interim agreement.

U.S. allies, including Israel, Egypt, Jordan, Saudi Arabia, United Arab Emirates and Bahrain, have expressed alarm at the prospects for a deal that only slows but does not halt Iran’s progress toward a nuclear weapon.

They also are concerned that the Obama administration has focused narrowly on Iran’s nuclear challenge while turning a blind eye to its ballistic missile buildup, support for terrorism and efforts to gain regional hegemony. They worry that the Iran nuclear negotiations will accelerate the U.S. withdrawal from the region, or worse yet, yield an Iranian-American rapprochement at their expense.

The Obama administration’s passivity prompted Saudi Arabia to lead a ten nation coalition to intervene in Yemen on behalf of the Yemeni government, which was overthrown by Houthi rebels allied with Iran.

But the administration’s eye is on a different prize.  One administration official proclaimed: “The truth is, you can dwell on Yemen, or you can recognize that we’re one agreement away from a game-changing, legacy-setting nuclear accord on Iran that tackles what everyone agrees is the biggest threat to the region.”

That official may want to touch base with increasingly alarmed U.S. allies, who have concluded that the Obama administration’s desperate push for a questionable agreement with Iran has become the biggest threat in the region.