Remembering the Vietnam War, 42 Years After US Troops Withdrew 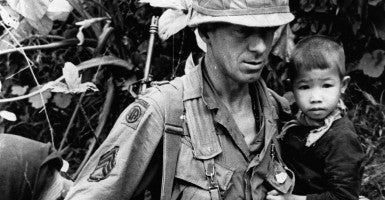 An airborne Staff Sergeant in the US Army takes a little prisoner into custody which he found during the operation held just after the New Year's cease-fire, southwest of Da Nang, Vietnam. (Photo: Keystone Pictures/Newscom)

On this day, in 1973, the last of the U.S. troops withdrew from South Vietnam. The eight-year war was over.

Two months earlier, the United States, North and South Vietnam, and the Vietcong signed a peace agreement in Paris, ending the direct U.S. military involvement in Vietnam. Among the agreement’s provisions was a cease-fire throughout Vietnam and withdrawal of U.S. forces. But even before March 29, communists violated the cease-fire.

More than 58,000 American lives were lost in Vietnam—a war often referred to as the nation’s least popular war. Today, Americans honor the men and women who served at the Vietnam Veterans Memorial in Washington, D.C., where all 58,000 names are listed chronologically.

Here’s a look back at some of the iconic images of the Vietnam War. “War comes to the living room.” (Photo: Library of Congress) A U.S. soldier clears a jungle area with his flame thrower, May 22, 1970. (Photo: evhistorypix/Newscom) A U.S. Army soldier directs a helicopter to pick up soldiers injured after a parachute drop in South Vietnam, October 1966. (Photo: evhistorypix/Newscom) Marine Frank Bunton prepares for Christmas as he carries a tree while on a search and destroy mission near the Demilitariezed Zone north of Con Thien, Vietnam. (Photo: Keystone Pictures/Newscom) Vice President Lyndon B. Johnson stands among a group of Vietnamese soldiers and Americans during a visit to Saigon, South Vietnam, in the 1960s.(Photo: Library of Congress) Anti-war demonstrators carry signs, “No more…Stop the war!” as singer Eartha Kitt speaks in front of the White House in 1968. (Photo: Library of Congress)

A young U.S. soldier with gun in hand stationed in a hollow produced by an explosion. (Photo: monhistorypix/Newscom) An American soldier keeps a young boy and a newborn in his arms. In the background, a truck and other two children behind a barbed-wire fence in Saigon, 1968. (Photo: monhistorypix/Newscom)

An American sentry sits guard in a street of Saigon, holding a gun in his hand with a curious new friend. (Photo: monhistorypix/Newscom) A U.S. soldier checks a hollow formed by the launching of a grenade for the probable presence of Vietcong. (Photo: monhistorypix/Newscom)