Why Are Lawmakers Changing Their Minds on Religious Freedom Law? 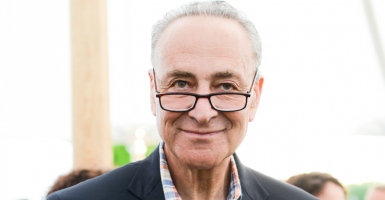 “.@NCAA if you’re looking for a new place to hold 2021 #FinalFour – NY has plent of great venues that don’t discriminate,” Schumer tweeted.

.@NCAA if you’re looking for a new place to hold 2021 #FinalFour – NY has plenty of great venues that don’t discriminate. #final4fairness

But Schumer was the main sponsor of the Religious Freedom Restoration Act that was enacted in 1993. While Indiana’s religious freedom law differs in some minor respects, in essentials it closely matches parameters set forth by the federal law that has been in place for more than two decades, noted Heritage Foundation analyst Ryan T. Anderson, citing legal analysis by Josh Blackman, an assistant law professor at South Texas College of Law.

Hey @SenSchumer Care to explain how Indiana religious freedom law is any different than the one you SPONSORED in Congress? @Heritage @NCAA — Ryan T. Anderson (@RyanT_Anderson) March 27, 2015

.@SenSchumer could you explain how Indiana’s RFRA is different than the federal RFRA you sponsored in 1993?

.@SenSchumer didn’t answer this Q on Twitter, so I went down to the Senate seeking comment. https://t.co/SfPVqEtnoH “Not right now,” he said

Sad this new Indiana law can happen in America today. We shouldn’t discriminate against ppl bc of who they love #LGBT http://t.co/mDhpS18oEH — Hillary Clinton (@HillaryClinton) March 27, 2015

To learn more about Indiana’s new religious freedom law and what it will mean for businesses, check out Anderson’s and Sarah Torre’s column on it.