What to Expect From Today’s Operation Choke Point Hearing 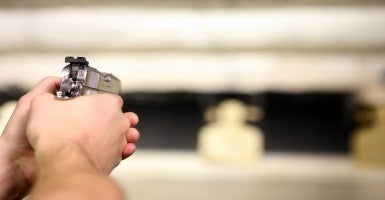 For the first time this year, Congress will get a chance to directly question the Federal Deposit Insurance Corporation (FDIC) over its involvement in Operation Choke Point.

In a hearing this afternoon led by Rep. Sean Duffy, R-Wis., who calls Operation Choke Point “the greatest government overreach that no one is talking about,” the Financial Services Subcommittee on Oversight and Investigations will probe FDIC Chairman Martin Gruenberg.

“The FDIC should send a strong message that it will not tolerate this kind of abuse within the agency,” Duffy told The Daily Signal Monday in an email interview.

Those that led the efforts should be reprimanded—and fired if necessary—so that they aren’t out there conducting the same biased exams. Operation Choke Point was launched in 2013 by the Justice Department as a way to reduce consumer fraud by “choking” certain businesses’ access to banks and other financial services.

The Justice Department maintains it has no interest in pursuing legal industries, but since then, the program has come under fire by Republicans in Congress for blocking many legal but politically unpopular business owners, like firearms and ammunition sellers, from the financial sector.

Emails unearthed in a 20-page investigative report by the House Oversight Committee last year detailed regulatory officials at the FDIC scheming to influence banks’ decisions on who to do business with by labeling certain industries “reputational risks,” ensuring banks “get the message” about the businesses the regulators don’t like, and pressuring banks to cut credit or close those accounts.

Much of the criticism arose from a list that was adopted into Operation Choke Point, which labeled a range of both legal and illegal industries “high risk” for fraud.

The FDIC has since removed the list and says it has walked back its involvement in Operation Choke Point, but banks still appear hesitant to do business with firearms sellers and other industries targeted on their list.

On Monday, The Daily Signal obtained an application from a customer applying to open a bank account with Wells Fargo. The bank still labeled gun dealers as a “person of high risk.”

The customer wished to remain anonymous, but a portion of the application is embedded below.

The Daily Signal reached out to the FDIC, which declined to provide comment for this report.

A number of Operation Choke Point victims in the firearms industry will be present at today’s hearing. Duffy says the committee will use personal stories to hold the FDIC accountable.

“By calling on the first hand accounts of constituents who have been victims of this program, we will not allow the Chairman to hide behind the [Justice Department],” Duffy said. “Some of these victims will be in the room, and will be looking for the Chairman to account for the FDIC’s involvement.”

Among the victims attending today’s hearing is Mike Schuetz, owner of Hawkins Guns LLC in Hawkins, Wis., which is Duffy’s home state.

Schuetz recorded a series of conversations between himself and employees at Heritage Credit Union telling him they couldn’t offer his gun business credit because of pressure from bank examiners.

“We have to answer to the examiners. Whoever they are,” a bank teller told Schuetz.

While gun sellers have been somewhat outspoken regarding the impact Operation Choke Point has had on their industry, critics say the program is hurting a whole range of legal merchants.

“The victims who are attending the press conference will be but a small representation of the numerous cases we’ve heard of in our industry of businesses that are being unduly harmed by Operation Choke Point,” Amy Cantu, Communications Director for the Community Financial Services Association of America, which represents the payday lending industry, told The Daily Signal via email.

“The [Community Financial Services Association of America] has members that, even today, continue to lose banking relationships and are having their bank accounts closed despite being legal, licensed businesses.”

Duffy worries that if Operation Choke Point is not held in check now, the program could extend its tactics into other industries.

Today, our government is targeting gun shops, what happens if tomorrow they decide to target your family business? That’s why this hearing is important and that is why it’s crucial that we stay on this until those responsible are held accountable.