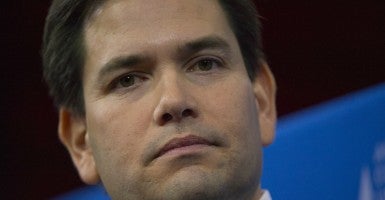 President Obama signed the Affordable Care Act into law on March 23, 2010, and the law has remained controversial.

In an op-ed Monday for Fox News, Rubio, a likely presidential candidate, unveiled a “three part plan to serve as a foundation for the post-Obamacare era.”

“Over the last five years, Obamacare has revealed the painful consequences of placing our faith in big government,” Rubio wrote. “Government’s ambitions may be limitless, but its abilities are not. The free market, when allowed to function as intended, has no such limitations. It has an inexhaustible ability to empower our people and meet their needs. We need leaders in Congress—and in the White House—who will recognize that fact.”

Rubio suggested providing an “advanceable, refundable tax credit” that Americans can use to purchase their own health insurance. These credits would gradually become equal to the preference shown to employer-based plans.

Rubio wrote that reforms should “encourage innovation.”  These innovations include the freedom to purchase coverage across state lines and health savings accounts. Rubio proposed that those with pre-existing conditions “should be able to find coverage through their state’s federally-supported, actuarially-sound high risk pools.”

Lastly, he argues that Medicaid should transition into “a per-capita cap system,” and Medicare, become a “premium support system” along the lines of the existing Medicare Advantage and Part D programs.

Rubio adds that he hopes “consumer-centered reforms” will mean that “all Americans will have access to affordable health insurance in the 21st century.”

Grace-Marie Turner, the founder and president of the Galen Institute, a public policy research organization that promotes individual freedom and consumer choice in health care, told The Daily Signal in an interview that Rubio “gets it.”

“Rubio is absolutely on the right track, he gets it that people are absolutely unhappy with this law,” said Turner.

She said that after five years, the law still remains unpopular because the American people are “feeling personally the impacts of this law,” such as “sky-high deductibles” and costs that affect their jobs.

“It’s clear to me from his op-ed that he understands that,” said Turner.

She called Rubio’s “glide path” proposal “visionary” and said that it would go a long way towards eliminating tax discrepancies between plans purchased by employers or by individuals.

Turner said that “the media and the left are blind to how many proposals are out there,” and that there were many alternative proposals and legislation.

“I have a file an inch thick,” she said.

Rubio’s plan drew criticism from the Florida Democratic Party, who said that it will end Medicare “as we know it.”

“Is the end of Medicare the price Florida’s seniors will have to pay for Marco Rubio’s partisan ambition?” Florida Democratic Party Chair Allison Tant said in a statement.” Rubio’s alternative to the Affordable Care Act, which has led to the largest drop in the uninsured rate in decades, would be to dramatically undermine the precious Medicare guarantee.”

“This is a risk Florida’s seniors simply cannot afford,” Tant added, “and they will reject Rubio’s plan to end the health care they depend on.”

Before health care reform, women were being discriminated against by their health insurance companies. No more. #ACAworks

#ACAWorks! About 16.4 million people have gained coverage from the law. Join us for a tweetstorm today at 2 to celebrate the law turning 5!

Sen. Ted Cruz, R-Texas, announced his candidacy for president in a speech Monday at Liberty University where he argued that “every word” of Obamacare should be repealed.