Is Ted Cruz Eligible for the Presidency? 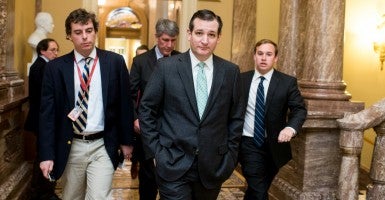 Republican Texas Sen. Ted Cruz’s announcement Monday that he will run for president has Donald Trump, the ladies on “The View,” and others in the birther crowd questioning Cruz’s eligibility to be president.

Born in Alberta, Canada in 1970, Cruz is the son of an American mother and Cuban father. Anticipating these questions, Cruz released his birth certificate in 2013 and officially renounced his dual Canadian citizenship in 2014.

This isn’t the first time a candidate’s eligibility has been questioned—the issue dogged President Obama in 2008, George Romney in 1967, and President Chester Arthur in 1880. But is there any merit in the case against Ted Cruz?

Whether it would not be wise & seasonable to provide a … strong check to the admission of Foreigners into the administration of our national Government; and to declare expressly that the Command in chief of the american [sic] army shall not be given to, nor devolve on, any but a natural born Citizen.

Justice Joseph Story wrote in his “Commentaries on the Constitution” that the natural-born citizen requirement “cuts off all chances for ambitious foreigners, who might otherwise be intriguing for the office; and interposes a barrier against those corrupt interferences of foreign governments in executive elections.” As law professor Sarah Duggin explains, it “seems evident that the Framers were worried about foreign princes, not children born to American citizens living abroad.”

Thus, the president must be a natural born citizen—and not merely a naturalized citizen. The difference boils down to whether that person was a U.S. citizen from birth.

Under the British doctrine of jus sanguinis, citizenship passes from one or both parents to a child, regardless of the birthplace. The First Congress adopted this principle as law when it enacted the Naturalization Act of 1790, which declared that “the children of citizens of the United States, that may be born beyond the sea, or out of the limits of the United States, shall be considered as natural born citizens.”  Though the 1790 law was superseded by subsequent naturalization laws as well as the Fourteenth Amendment, the principle of jus sanguinis remains central to understanding who is a natural born citizen.

Further, 8 U.S. Code § 1401(g) extends citizenship to children who are born outside the United States or its territories, provided that one parent is a U.S. citizen who “prior to the birth of such person, was physically present in the United States … for a period or periods totaling not less than five years.” By comparison, a naturalized citizen is a person, born in a foreign country to parents who are not U.S. citizens, who seeks to become an American citizen.

Attempting to end this debate, in 2008, the Senate unanimously passed a resolution stating that John McCain, who was born on a U.S. military base in the Panama Canal Zone, was a natural-born citizen and eligible to become president. The resolution explained there was “no evidence of the intention of the Framers or any Congress to limit the constitutional rights of children born to Americans serving in the military” and that previous presidential candidates (such as Barry Goldwater, born in Arizona before it received statehood and George Romney, born to U.S. citizen parents in Mexico) were “understood to be eligible to be president.”

Based on the original meaning of the citizenship requirement and current law, Ted Cruz is a natural-born citizen. As Katyal and Clement conclude, “[A]n individual born to a U.S. citizen parent—whether in California or Canada or the Canal Zone—is a U.S. citizen from birth and is fully eligible to serve as president if the people so choose.”

Whether or not Ted Cruz is your candidate of choice, there is no legitimate question about his constitutional eligibility to run for president.