How Serious Is ISIS Threat Against Military Families? 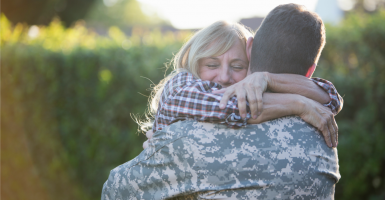 Our military and their families carry a heavy burden on behalf of all of us. That makes the threat against them by a shadowy outfit claiming affiliation with ISIS particularly heinous.

A group, calling itself the “Islamic State Hacking Division,” posted the names, home addresses and photos of one hundred American service members and called for attacks against them.

This is not news. Since 9/11, terrorists have wanted to kill us in our own backyard. In May 2007, six Islamist terrorists were arrested for planning an assault on Fort Dix, N.J., with assault rifles and grenades.  In November 2009, Major Nidal Malik Hasan killed 13 people and wounded 32 more fellow soldiers in a shooting spree at Fort Hood, Texas—the most despicable terrorist attack against the U.S. military on American soil in modern memory.

The United States is not the only country to experience these attacks. In 2013, two Islamist terrorists hacked a British soldier to death on a busy London street.

And it is not just our military that is under threat. Since Sept. 11, 2001 there have been at least 63 Islamist-inspired terrorist plots aimed at killing Americans on American soil.

Further, ISIS and al-Qaeda have a habit of making outrageous threats against innocents. Recently, ISIS has threatened to blow up the White House, Big Ben in London and the Eiffel Tower in Paris. Such threats, even the calls for violence that go unheeded, are standard psychological warfare for Islamist transnational terrorist groups used to inspire others to join their movement.

There is no telling from press reports if this is just more terrorist blustering or another serious threat to our men and women in uniform.

Many Terrorist Attacks Have Been Prevented

That’s cold comfort to service members who are trying to serve their country and take care of their families.

Since Sept. 11, 2001 there have been at least 63 Islamist-inspired terrorist plots aimed at killing Americans on American soil.

On the other hand, while the U.S. homeland remains a target in the crosshairs of transnational terrorists, it is not a soft target. Of the 63 documented plots aimed at the U.S. all but three were stopped before anyone was killed or injured. That’s not to say that terrorist attacks will never happen here—but it does show there are people actively trying to stop them, people who often succeed in halting them.

Despite the rise of ISIS, the meltdown in the Middle East, and the spike in transnational terror, these events are still rare here. The odds of an American dying in a terrorist attack are still something like 1 in 20 million.

How to Help Protect Yourself From Terrorists

That said, the threat isn’t zero. The danger is real. Fortunately, what everyday Americans can do to limit the possibility of becoming a victim of terrorism is to follow the kind of common-sense practices they ought to be following in their everyday lives anyway. Everyone should know and follow the steps to ensuring their own public safety.  These practices are as valuable in avoiding terrorist plots as they are protecting families from a range of threats from identity to assault.

Practice online what Heritage Foundation cyber security expert Steve Bucci calls good “cyber hygiene.” Don’t needlessly put your personal information at risk online. For example, the privacy settings that different digital devices and programs offer you, are there for a reason. I would use the most aggressive privacy settings and limit the amount of personal information that you post online.

Also, your family should know basic public safety practices and know how to use your best judgment to identify activities that are extraordinary or suspicious. Suspicious activities might include someone looking lost and/or wandering around; appearing to be conducting surveillance (using cameras/video); abandoning an item and leaving the area quickly; or openly possessing a weapon or any prohibited or dangerous item.  In all cases, the appropriate action is to notify a responsible person such as a superior, security official or local law enforcement. Suspected terrorist activities can also be reported to the FBI’s hotline at tips.fbi.gov.

Also be America strong. Terrorists are cowards—they prey on innocents. When we fear them they win. When we all stand as a nation and declare we will not stand for their threats, we win—and they lose.